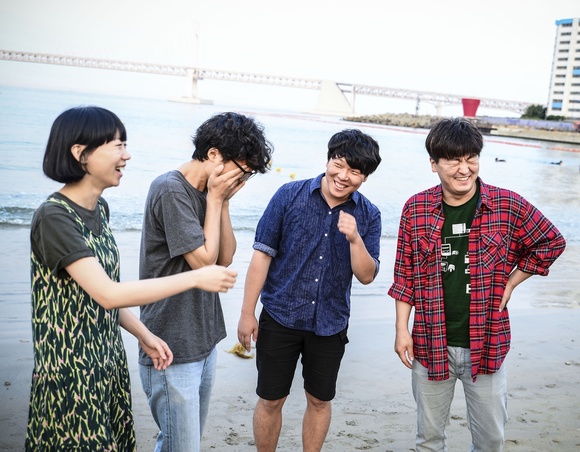 Say Sue Me are a surf-inspired indie rock quartet from Busan, South Korea.

Friends since 5th grade Jae Young (Bass) and Kim Byungkyu (guitar) were introduced to drummer Semin Kang, and then they heard Sumi’s speaking voice and decided she should be the singer. Sumi Choi turned out to be a natural at songwriting. Formed in 2012, they released their 1st album [We've Sobered Up] in 2013 and EP [Big Summer Night] in 2014. Damnably Records of London, England released a Record Store Day exclusive 7" EP [Semin] and Compilation album [Say Sue Me] in UK/Europe to coincide with the band’s debut UK tour supporting Japan's Otoboke Beaver that started at a sold out show at the legendary 100 Club.

The band have picked up considerable BBC6Music Radio play from Gideon Coe, Tom Ravenscroft and Don Letts and were included in the BBC introducing Spotify Playlist. John Kennedy on Radio X has also been championing them. Say Sue Me’s second album will be released January 2018 with UK/EU/USA dates to follow.

Recent Press
"a sweet-sounding tune about staying upbeat even when you're feeling down on yourself." The Fader

“Twee, but not too twee, Busan, South Korea four-piece Say Sue Me is my favorite recent random discovery. They released this endearing, 18-song self-titled album in April. Really sweet, melodic rock that makes me feel like I'm in high school.” The Fader

“It’s 2:50 of deliriously lovely vocals, instrumentation and an attitude that just wants to brighten up your day however you’re feeling. And coming from a band with such a tragic back story? I love them even more for that.
An absolute must for indie discos around the country.” Louder Than War

“The group hails from South Korea, but don’t let that fool you, as they seem to have the same knack for crafting infectious hooks as everyone’s indie darlings, Alvvays….” Austin Town Hall

“Instantly loveable, “Good For Some Reason” is the radiant new track from Say Sue Me, a band who certainly sit as the only “surf-inspired indie rock quartet from Busan, South Korea” that we’ve ever covered on GFP. Hazy, somewhat melancholy, but exuding a beautifully golden glow that lingers for long after the track has finished,…a wonderful burst of guitar pop,” Gold Flake Paint

“The quartet play an addictive amalgam of sugary indie pop and gritty surf that showcases a finely-tuned sense of melody and technical skill. Frontwoman Sumi Choi is a witty lyricist, and she writes songs about normal things such as going to work, drinking too much, feeling lonely (“Long Night and Crying”), or being a problem child (“One Week”) in relatable, humorous way. Nary a song on Say Sue Me isn’t a total ear worm. Many, such as the title track, are often quite funny…Summer’s winding down, but Say Sue Me deserve a spot on your playlist before the last warm night of the year has passed into memory.” Mariana Timony - Bandcamp Daily Feature