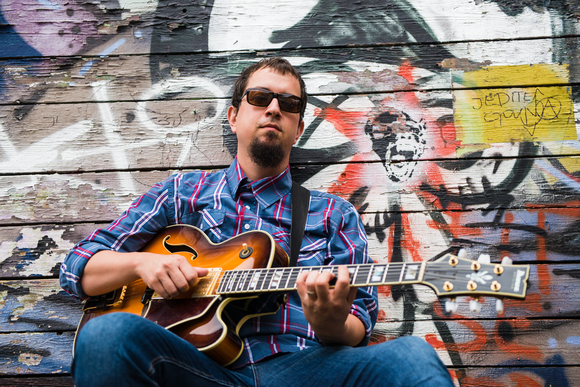 Guitarist SAMO SALAMON (SLOVENIA) was declared in 2008 by the magazine Guitar Player as one of the hottest 10 guitarists in the world, while his first album Ornethology was ranked among the 1001 best albums in the history of jazz (Penguin Guide to Jazz). On the other hand, the pianist STEFANO BATTAGLIA (ITALY) has been one of the leading jazz pianists for the last 30 years, having recorded more than 30 albums as a leader, including 6 CDs for ECM Records. The duo will present new compositions by both players, which are a mix of composed and improvised music and will be released on the upcoming album STEFANO BATTAGLIA & SAMO SALAMON: Changes (2016).

"An adventurous guitarist who continues to find new ways to challenge his instrument by providing new contexts that expand his sound and compositions." (Jakob Baekgaard, AllAboutJazz 2014)

»His restless and bold creative spirit and his impeccable musicianship both as a composer and performer is what makes him one of the most singularly exceptional jazz musicians to come out of the European scene.« (Hrayr Attarian, AllAboutJazz, USA, 2014)

»Samo Salamon has developed his very own style and with each record, he adds and peels away new layers of his sound. He is like a painter that explores new instrumental colors.« (AllAboutJazz, USA, 2015)

"One of the most interesting guitarists in modern jazz who continues to stretch the boundaries of music." (AllAboutJazz 2013)

"Much like his contemporaries Kurt Rosenwinkel and Ben Monder, Salamon is forging ahead with a new standard of jazz guitar that is accessible and beyond established categorizations." (John Barron, Jazz Word 2011)

"Salamon's music is expanding the framework of the modern guitar trio, whereby Salamon is one of the most interesting guitarists in Europe." (Geiger 2011)

»One of the most influential guitarists of our time, which is an amazing success for a musician of his age.« (Jure Potokar, January 2011)

"Samo Salamon is neither flashy nor common but actually brilliant." (Edward Blanco, EJazzNews 2011)

"One of the finest young guitarists in all of Europe." (Dan Bilawsky, AllAboutJazz 2011)

»Samo Salamon deserves to be considered in the same breath as contemporary guitar innovators like Kurt Rosenwinkel, Ben Monder and Adam Rogers.« (John Kelman, All About Jazz 2007)

The prestigious publishing house Penguin Books (Brian Morton & Richard Cook: The Penguin Jazz Guide - The History of the Music in the 1001 Best Albums (Penguin Books, 2011) has in 2011 ranked Samo Salamon's CD Ornethology among the 1001 best albums in the history of jazz along the jazz giants, such as Miles Davis, Thelonious Monk, John Coltrane, Duke Ellington, Herbie Hancock, Chick Corea, Charlie Parker and others. Samo Šalamon is the only Slovenian musicians who can boast with such an achievement!

Stefano Battaglia has been one of the best jazz pianists for the last 30 years, having played more than 3000 concerts all over the world and recorded more than 100 CDs, including more than 30 CDs as a leader. He has collaborated with many renowned jazz musicians, such as Lee Konitz, Kenny Wheeler, Dewey Redman, Tony Oxley, Barre Phillips, Steve Swallow, Enrico Rava, Aldo Romano, Bill Elgart, Dominique Pifarely, Jay Clayton, Pierre Favre, Bruno Chevillon and many others.

Since 2004 he has been recording as a leader for ECM Records, for which he has released 6 albums since. All his records have received amazing reviews from all over the world (including Jazz Times, Downbeat, AllMusic, AllAboutJazz, etc.).