Ruby Dee and the Snakehandlers 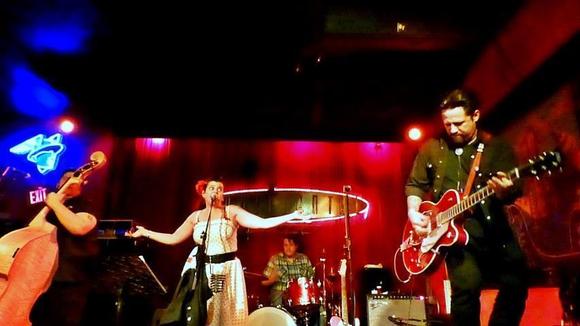 Ruby Dee and the Snakehandlers are a high octane Americana roots and rockabilly four piece combo that plays twang the way it was meant to be heard- with attitude!

After nearly constant touring for the past fourteen years, including 1200-plus dates across America, Europe, and Australia, songs from the band’s fourth album, MILES FROM HOME (Dionysus Records, June 2008; produced by Conrad Uno), are still earning steady airplay, including “Cold Pines and Red Dirt,” which earned band front woman- lead vocalist and songwriter Ruby Dee- runner-up honors in Songwriter magazine’s 2007 competition. The album charted in at #86 on the AMA Top 100 for more than four weeks and #26 on the Texas Third Coast Music FAR Top 40. The “Round and Round” video, release in May 2009, has earned great acclaim with its cameos of Seattle rockabilly musicians and famous musical neighborhoods.

“Blending snarling rockabilly with honky-tonk heartache, Ruby Dee and The Snakehandlers have crafted their best recorded set thus far,” said Blue Suede News of the album. “The heart of the 13-song set emanates from Dee’s original material which combines poetic expressionism and hillbilly sass. Aided by Jorge Harada’s top-flight guitar work — which alternates ballroom tenderness with rowdy roadhouse rock — she sounds like a Texas dance hall chanteuse visiting us from another era.”

The band's last release: LIVE FROM AUSTIN TEXAS came out mid May 2011 on both CD and vinyl, showcasing a few new songs and fans old favorites cranked up with that live jumpin' sound for which the Snakehandlers are so well known. Songs from the CD charted for three months on both the AMA and Texas Third Coast Music charts, and the CD earned the band a 54th Grammy consideration for Best Americana Album.

Their latest release: ROCKABILLY PLAYGROUND came out May 2013 on both CD and vinyl, and is a roots and rockabilly album for the whole family. With all mature instrumentation (no kazoos or funny voices) and lyrics for the kids: songs about homework, naptime, why we have to follow all the rules, super best friends, and more. Ruby wrote the record when she saw how many of their fans have children and when they can bring them to shows, how many of those kids LOVE this style of music! So rather than sing achy breaky 'he's gonna get it' type songs to them, she wrote new ones with the kiddos in mind. Songs from the album charted on both AMA and FAR charts, and earned the band a 56th Grammy consideration for Best Children’s Album.

“Risky — and perhaps just a bit risqué — Ruby Dee and The Snakehandlers conjure forth all sorts of visions of another time,” said Metro Santa Cruz after a California show. “Rooted firmly in the classic country and rockabilly tradition, the band is an authentic backdrop for lead singer Ruby Dee’s blend of Wanda Jackson sass and Patsy Cline pathos. The band holds it down with the insistence of a chugging train while Dee, a pinup heartbreaker of yesteryear with thoroughly modern attitude, commands the stage.”