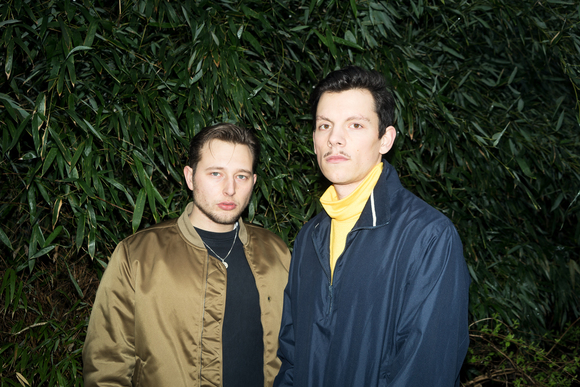 OTEO - Hey You Up (Official Video)

Inspired by a love of club culture, their latest EP "Friendzone" is danceable and packed with stories and observations from the nightlife. Call them the Post Midnight Boy Band.

Disco and Funk merge with House and Garage influences: Matteo's sophisticated production meets Toni's laid back vocals. The result: extremely catchy dance tracks. OTEO are bored by long intros, so they wrap things up in a cool 3 minutes - quite enough to dance extensively and work up a decent sweat. This is ensured by a club-friendly bpm count and minimalistic arrangements.

"Friendzone" is the result of recent times performing as a live act. While their first EP "Walking Blind" felt as intimate as a bedroom production, OTEO developed a new dynamic in the first year on the road. The danceable tracks were the ones that received the most energetic reaction from the audience. Therefore, for their second EP “Friendzone”, the duo have collected six new songs which they originally wrote for live shows.

The stories on "Friendzone" take place at night. “Get Down” is a tongue-in-cheek account of an escalating house party and its overburdened host, who finally calls the cops to get rid of his guests. "Weird Compliments" is about a unique opportunity to score with the coolest woman in the club and the attempt not to act like an idiot. The title song "Friendzone" is about the very unfortunate situation of having fallen in love with your best friend. Instead of revealing your romantic feelings, you have to watch the object of your affection flirt with other guys. All of this sounds quite a bit more contemplative than the energetic beats would suggest. But fuck it! - let's dance.

OTEO are Matteo and Toni. Her second EP "Friendzone" will be released on 18 October 2019, just in time for the start of the club season.