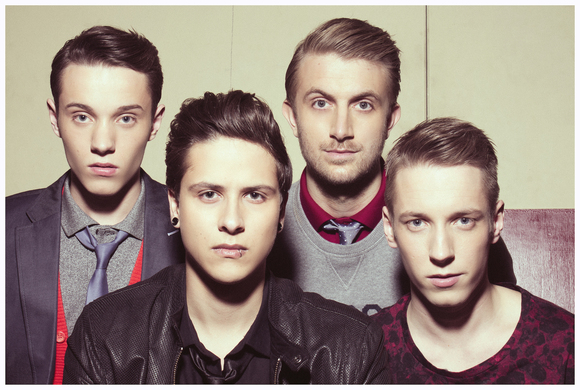 Dutch pop rock band with dance influences, touring around the world all year.

There are many ways to start a band. Maybe a manager finds some good looking boys through a talent show. Or a singer-songwriter brings together a group of brilliant musicians to accompany him onstage. Only Seven Left was formed the old school way. Two boys meet in high school and they happen to like the same music. One plays piano, one plays guitar and he persuades his little brother to buy a bass guitar. They flip a coin to decide who has to sing.

That was 2006. Seven years later Only Seven Left has had their share of line-up changes and their music grew from acoustic pianopop to poppy punkrock to danceable rock. One thing remains: friendship is still the foundation everything is built on. After a successful independent release of debut album It Was All A Dream in 2010 a sold out tour across the country follows. Teen magazines can’t stop writing about the band and the online following grows to an extend that even radio and serious press can no longer ignore.

In 2011 a new friend is added to the group: Bjørgen shows off his songwriting skills during the online auditions for a new lead singer and he is the obvious winner from day one. The competition draws a lot of attention from national media and major labels. The band wins the Interactive Artist Award for their use of social media to relate to their fans. Only Seven Left’s video diaries, in which they document literally every single thing they do, are infamous even among people who are not that into their music.

After an intense creative month in the studio, in April 2012 EMI releases Only Seven Left’s new album Anywhere From Here. Singles Love Will Lighten The Dark, Higher and Turn Your Head Around make it to the playlists of national radio and enter the charts. In reviews the fresh new sound is compared to Two Door Cinema Club, Katy Perry and 30 Seconds To Mars.

Is there anything better than a long drive in a small, smelly van with your best friends, on your way to the next show? Or on a plane, if you will. Only Seven Left has toured in foreign countries such as Egypt, the UK, Belgium, Indonesia and Turkey.

After a heavy year of recording, touring and promoting, in 2013 the band takes some time to work on individual projects and to write new songs. Only Seven Left has never released a new song that sounded like the last one and the band is always looking to try new things. As grateful as the band members are to their active and loyal fanbase, a fear of losing fans is not keeping them from experimenting with influences from electronic dance music.

In the near future Only Seven Left will release new songs on a regular basis, accompanied by an almost overwhelming amount of videos. In 2014 national and international tours are planned. Because there is nothing better than rocking out on stage with your best friends and looking at their faces to realize all of them are thinking the same thing. Yes, this is why we started a band!