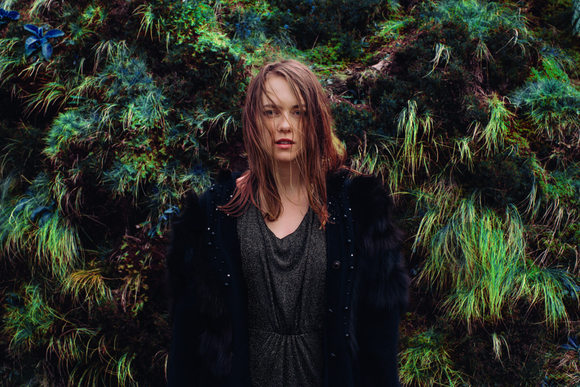 "ethereal, magnetic electro-pop"— EARMILK “alt-pop perfection” — WONDERLAND "bonkers and hypnotic” — HIGH SNOBIETY "an exotic and lush piece of electro pop” — THE LINE OF BEST FIT "a slice of epic leftfield pop” — DIY MAGAZINE "A beautifully composed return” — CLASH Born to Russian immigrant parents in Germany, O-SHiN took her first steps into music as a solo artist in the Netherlands, before eventually finding her artistic destiny in a lonely cabin in Sweden.

It was when O-SHiN moved to a cabin in the Swedish countryside with five befriended musicians, producers and a video artist, things really began to click. After spending time in numerous sessions with many different producers in Stockholm, she felt the urge to seek inspiration surrounded only by nature and trusted friends.

Whilst in the Swedish cabin, they all started to collect and sample sounds from the forests, lakes, rivers and landscapes that surrounded them. Utilising a huge collection of exotic instruments they found in the barn, O-SHiN took the ideas that were formed during this summer and finished the production in Berlin, where she moved straight after Sweden.

The experience of this summer in Sweden turned out as the foundation the new project called O-SHiN. "It was a big adventure for eveyone involved” she says. "The location was dreamlike and had so much more to give than expected – like the collection of crazy instruments I've never used before. The lake, the campfire, the calmness in nature and making music. There's nothing more beautiful to me then recording music like that.”

An existential realisation shapes O-SHiN’s music, and is mirrored in her thoughtful and imaginative lyrics: life is transient. Her music is about accepting death, which goes hand in hand with appreciating life and using the time we have. Musically, this is realised in a mixture of organic, familiar sounds; catchy arrangements on the one hand — and unusual, exotic harmonies and instruments on the other.

With more music and touring set to follow in 2018 — it’s an exciting time for O-SHiN.