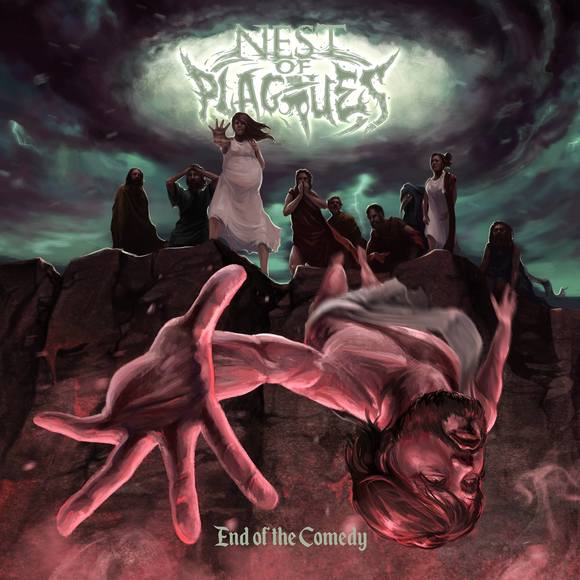 NEST OF PLAGUES is a modern death metal/groove metal/deathcore band from Budapest, Hungary.

De facto the band was formed in June 2014 by bassist Dániel Ivanics, guitarist Márkó Nyerusáji, guitarist Máté Breier and drummer Balázs Fűr. In September Márkó left the band as he had lost interest in the music the band was playing. To fill the role of the second guitarist, Tamás Bölcskey, the guitarist of Dániel and Balázs’s former band, joined the band in October 2014. Probably the real starting point for the band was when Tamás joined.
After Tamás’s joining they recorded three demo songs. These were released on NEST OF PLAGUES’s Soundcloud profile. The first show that featured the current lineup took place in January 2015 in Budapest. In April they played as a supporting band with italian metalcore band, Dead Like Juliet and till the autumn they were continuing to perform shows on the underground stages of Hungary.
In summer 2015 the band rethinked their music style and started writing new materials. Regrettably from autumn until next summer Tamás couldn’t participate in band’s life as an active guitarist due to health problems. The band were continuing to write music and perform shows without him.
Since Tamás had returned in summer 2016, NEST OF PLAGUES began their way to wide popularity on underground stages. This was the first time they have played at an underground festival and in September they won the Rocktogon Talent Fest in Budapest.
In summer 2016 the band thought the new materials were more energetic than the old ones, thus they entered studio. Their debut EP was recorded, mixed and mastered in August 2016 in No Silence Studio by István Simon and released on 30th September 2016. The artwork was made by Örs Bakonyi (Hartproject Tattoo Art). Available on YouTube, Spotify, iTunes, Google Play, Amazon, Deezer, Bandcamp and other platforms. Since the release of the debut EP the band’s popularity has increased. They got good feedback in Hungary and from abroad too.
On 15th October 2016 NEST OF PLAGUES participated in an international talent competition, GBOB Semi Final as a foreign band in Timisoara, Romania. They won opportunity to perform a show at Revolution Festival 2017.
Till January 2017 the band has been working on writing new materials for their first full length album which will be released at the end of the year. New single and official lyric video ’The Faceless Ones’ was released on 30 April, 2017, made by Proving Ground Pictures.
Summer Festival Tour 2017 was announced on their Facebook and Twitter page: 06/02 Revolution Festival - Timisoara, Romania | 06/03 ÉTER Plusz Talent Festival Final - Eger, Hungary | 06/17 Dobbantó Talent Festival Final - Szarvas, Hungary | 07/01 Alpárfeszt - Tiszaalpár, Hungary | 07/22 Unity/Redneck Festival - Szolnok, Hungary | 08/11 DeathCrew Festival - Nyírbátor, Hungary | 08/19 IX Full Of Anger Festival - Debrecen, Hungary.
In October 2017 they finished the writing of the new songs and started recording the guitar/bass themes at home. The band entered studio in November and started working on vocals recording/mixing/mastering. The first single from upcoming album was dropped on 31th December, 2018 and the whole was released on 8th January, 2018.