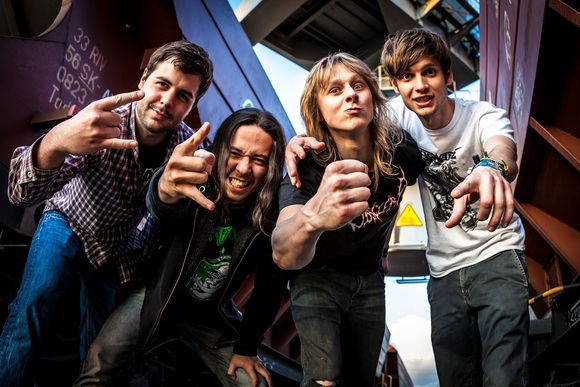 What does MYNDED actually mean? The original idea for the band name was "Mind Dead", but there were several reasons why we've chosen MYNDED. Most bands out there have got regular English words as band names. So what's wrong with that? Nothing, but a “name” doesn't have to be a defined word, which you can look up in a dictionary. And because there is no such word as “mynded”, it suddenly becomes interesting and unique. And that's what we want to be.

The band was started by Niko (Guitar/Vocals) and Mark (former Drummer). When their old band split up during 2011, they started to search for a new guitarist and bassist. In November of the same year Alex (Guitar) and Tom (Bass) joined the band, and they immediately started to rehearse together and write their first songs.
The band worked hard during the next few months until their first gig as MYNDED took place in April 2012. After this first show they received a lot of positive feedback, which drove them to practice even harder. More and more gigs were confirmed and MYNDED could steadily expand their fan base.
Then in September 2012 Joachim joined the band as the new drummer. Also the band started to record their first EP to make their music available for the fans they've won so far. After more promising gigs the band started to discover their own identity and style.
In January 2013 the first music video and also the EP “Humanity Faded Away” were released, which were lauded by their fans and the press.

Slow but steady we earn respect and attention of journalists, bands and managers of the metal scene. This fact motivates us to keep on doing what we're doing and improving as a band in every way possible.