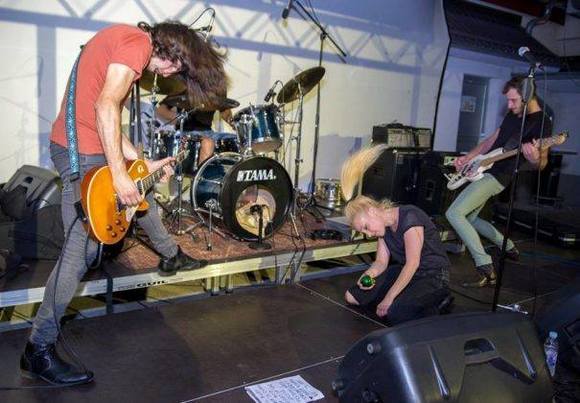 Moskva is a rock band from Rijeka, Croatia, formed in 2010.

The band is a classic rock combo - Tamara Dorčić on vocals, Ivan Ujević on drums, Kruno Kukuljan on bass and Vladimir Tomić on guitar. After a couple of years of frequently playing gigs and festivals as a demo band, their potential was soon recognized by Dallas Records and the band signed a deal in 2011 that led to recording their debut album „Poligraf“, produced by Matej Zec (Let3, Morso) and released in late 2012.
To support the album promotion, Moskva played a string of club shows, as well as several festivals- Hartera, Festival 7 jezera, Opatijske Barufe, Magdalena Fest (Slo), Festival uličnih svirača (Srb) and as an opening act for Glasvegas gig in Močvara, Zagreb, handpicked by the band themselves!
The album was featured in many „Album of the year“ lists from various magazines and music portals in Croatia.
In May 2014 Moskva released a new single „Svijet je naš“ featuring Ivan Dečak (Vatra), which got to the official Croatian Top 40 chart and stayed there for whole nine weeks. After releasing another single, „Dr. Acid“ in November 2014, Moskva announced their second studio effort, „LOVESEXDISTORTION“, released in February, 2015. The album was met with positive reviews and intense live promotion in clubs and festivals- Inmusic festival, Student Day festival, Prvomajski Inkubator festival, Rock camp Orsula, Festival Dev9t (Srb)...
As their performances were getting more inspired and intense, and the band getting tighter with every show, Moskva started working on new material, turning a deliberate stylistic focus on 70's influenced hard rock and blues rock, which can be found on several tracks on their first two albums. Teaming up with Matej Zec as producer, they recorded ten songs for their third album in an old industrial hall in Rijeka, from 1st to 10th August, this summer. The material was recorded completely live, capturing the band's unique live energy and feel. The first single is due this October.