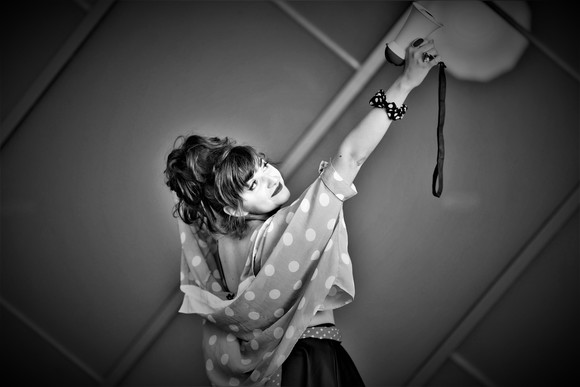 At a first glance at Masha Ray, you will inevitably look into her big, brown Bambi eyes. However, if you look more closely, you’ll quickly discover an accurately sharp drawn eyeliner, which the 24-year-old might use to smoothly cut through either marble or the hearts of her ex-lovers. The mix of the seductively sweet sound of her siren voice, the snappy-ironic lyrics and the decadent retro production make up the project Masha Ray.

The Berlin based singer/producer duo consisting of Masha and Roman Andor met during a Songwriter Camp in Rotterdam.
Combining the singers’ Ukrainian roots and eastern influenced musical education with Roman Andor’s lush trumpet sounds and rich beats, their Vintage Dance sound was born.

Until now Masha Ray collected a decent range of originals and covers that can easily fill a night, ranging from Electro-Swing, Dancehall, Pop to Balkan-Beats and Klezmer – referring to Masha’s jewish roots. The instrumentation varies from a performance as a duo with her producer and DJ Roman Andor to an ensemble with drums, bass, wind section and strings.

Their first single Sweetheart (Hasta La Vista), which came out in 2018, was very well received from listeners and eventually brought them a gig at the Universal Rooftop Party in the same summer. This was a great opportunity to show off their incredible live skills once more.

When Masha chirps out a song with her compelling voice and Roman’s electronic beats fill up the room, their youthful and impulsive manner will get everyone to dance. This is what the crowd has asked for and this is also what they need: Thick beats, an overall melodic vintage sound and a seductive singer to hopelessly fall in love with.
Masha Ray holds both – the very posh and feminine mid-century aesthetic and the bold and strong appearance of a modern woman – constantly on the lookout for new entertainment, either inspiring or romantic. She has a lot to say to the world and the world will stick to her lips like warm honey.