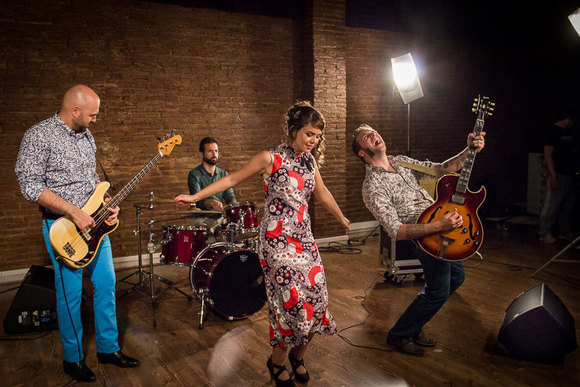 With the release of the first EP of the band in 2014, Time To Begin, Marina BBface & The Beatroots (The Pepper Pots, Sol Lagarto, Chocadelia Int, Electric Gozarela) were consolidated as one of the reference projects Scene the Spanish black music.

EP that was the starting point of a formation that is gaining strength day by day, partly direct flawless, but also be defining a style that drinking even different, and clear influences personality is gaining every day.

After a remarkable number of actions that could be generated with the EP, performing at festivals such as Black Music or sharing the stage with Brand New Heavies, Marina & The Beatroots BBface they knew it was time for the big validates. The album debut.

And under the name Still Beating get that first album. An album full of funk and energy, fast-paced rhythms and unstoppable groove. With a sound more raw and visceral, Marina BBface strikes again with one voice that fits perfectly in a dress embroidery base sections gala winds and soul harmonies. An album where is given the importance it deserves round the art of making songs, as evidenced by the infectious first single 'Open Up The Window' or average times if 'Empty Room' which is exposed full potential as both Marina their Beatroots.