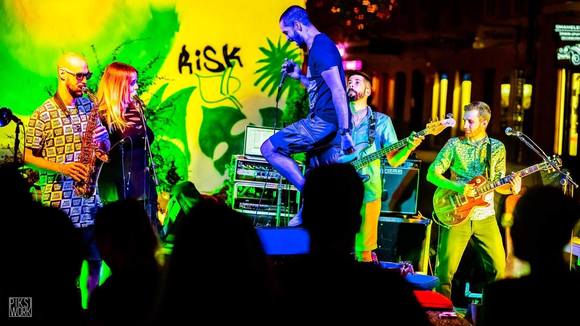 There once was a band...

Leni Kravac are undoubtedly one of those bands that merge the various influences of the Balkans.

They have half-jokingly called themselves “the most alternative turbo-folk band”. The common thread of the genre concoction of drum ’n’ bass, funk, jazz and hip hop is the Balkan temperament that permeates their music.

The project evolved a few years ago from a solo vision into a full-blown seven-piece band, in which the drums, bass and guitar are joined by the trumpet, saxophone and two vocals, the two sides of the aforementioned Balkan temperament – Tamara’s powerful female vocals on hand, Bechi’s quick-witted male vocals on the other. Their debut LP “Balconized” is a calling card of everything described so far, while Leni Kravac is a party band, which they continue to prove with their live shows.

They achieved this on their street tour of the Balkans, excellently featured in the music video for Balconized, as well as shows in France, Italy, Estonia and Slovakia, where they have been regulars for a number of years. It is time to put your hands in the air, your feet off the ground and: “Ayayayayayi!”