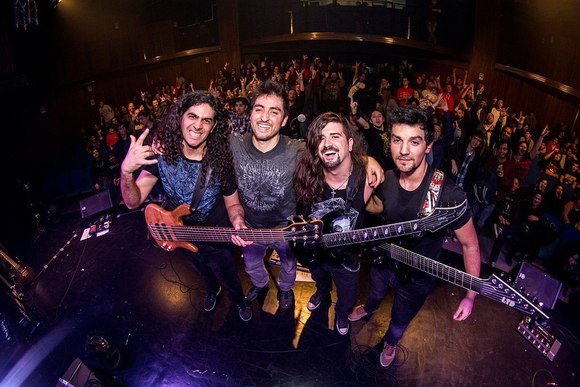 Benjamin Lechuga is an LA. based guitarist/composer from Santiago, Chile.

His career has been
flirting with success since the beginning. In 2005, at Age 17, he won the “Ibanez Project”
guitar contest and became one of the youngest Ibanez international endorsers ever.
After winning some other local guitar competitions, Steve Vai chose Benjamin’s song
“Pehoe” as the worldwide winner of the “Steve Vai Scholarship” contest. The prize
consisted in studying the 1 year Guitar Higher Diploma in Europe’s leading music
School: The Institute of Contemporary Music Performance in London, UK during 2011 -
2012.
His work with Power/Prog Metal band DELTA include 5 full length studio albums, 2 live
DVD’s and many live performances including the “Prog Cruise” Progressive Nation at
Sea festival in Miami, USA, and stage sharing with bands like Dream Theater,
Symphony X, Devin Townsend, Periphery, Animals As Leaders, Angra, Stratovarius,
among many others.
On 2014, Lechuga decided to emphasize on his solo work. For the first time he puts a
solo band together and starts touring in Chile and Argentina. He makes a crowdfunding
campaign that successfully raised funds to release his latest work. “The Search Part 1:
Introspection” was independently released in December 4th 2014 and it’s the first of 3
upcoming EP’s he is working on for 2015.