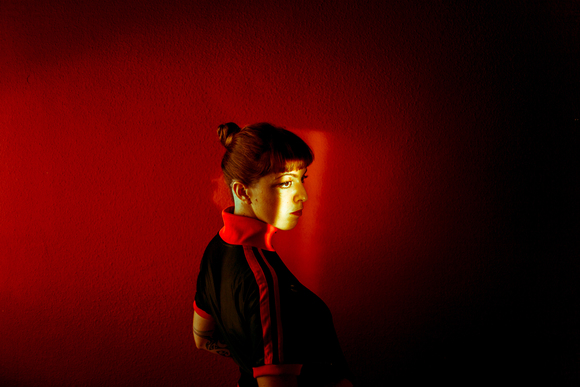 Sole Parody, better know by her stage name Le Parody (a play on her own surname), is an Spanish musician and recording artist from Southern Spain.

She is also a poet and feminism activist. She began her music career as a student in Los Angeles and was a member of various bands in Madrid.
Le Parody’s work has consistently received praise for its distinct musical style, which features African folk, Bollywood rhythms, Asian echoes, Flamenco beats and a rave attitude. Le Parody innovative music is hard to categorize in one genre. Her tunes call to mind familiar songs, but at the same time, they don’t sound like any of them.
Her unorthodox musical style has been characterized as “beautiful discomfort” and “sensory overload”. Le Parody’s stage performances are highly eclectic and energetic, a jovial chaos which rejects fusion, but instead, uses poetic lyrics and inspiring sounds drawing from diverse sources around the world.
.
Le Parody’s first album, CÁSALA (sound/track) was released in November 2012. It was critically acclaimed by the media and audiences alike as a surprising revelation and recommended as a new artist to watch. Sole Parody has been touring incessantly ever since, performing at prestigious festivals such as FIB (Festival Internacional de Benicasim) or BAM (Barcelona Acció Musical), appearing on Spanish national television and the best venues all over Spain. In 2014 Le Parody embarked on her first European and American tour across London, Brussels, Paris, Miami, Washington DC, New York City, Boston, San Francisco, Oakland, Los Angeles and Buenos Aires.
.
Hondo is Le Parody’s second studio album. It offers festive African landscapes, filling the gap between Spanish folk and electronic dance music with a lush mosaic of samples from Bollywood pop songs, forceful beats and ambient recordings. Hondo (Warner / Ponk Records / New Hispanic Music) was released on October 2, 2015. It was listed among the best albums of the year by important independent music media in Spain and Latin-America. The single Hondo Agujero has reached more than a million plays in Spotify and over 35K in youtoube in less than a year from its release.
.