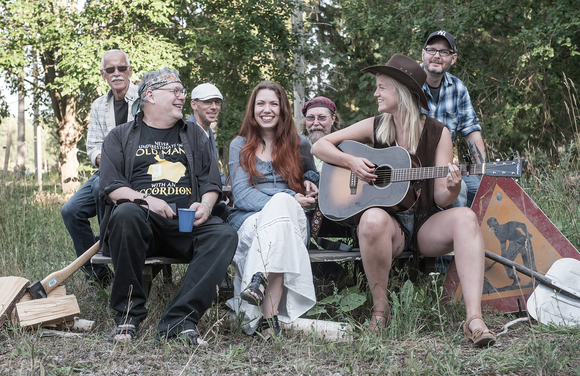 Swedish Lazy Afternoon delivers catchy Americana, a pot of influences from Country, Cajun, Tex-Mex, Rock music and Irish folk music. A live experience that offers great musical craftsmanship, as well as joyful playing. The sound is created by an unusual instrumentation, including accordion and Irish bouzouki. Add a bandleader who love to mix genres to find the best groove, and you have captured the genuine quality that characterizes Lazy Afternoon.

A musical life journey creates the sound
The band's founder and songwriter Bo Ahlbertz is a well known profile in the musical community on Gotland. It is his ”musical life journey” through different genres that has formed Lazy Afternoon´s style. Starting off as a rock bass player in his youth Ahlbertz soon moved on and developed his musical skills in groups inspired by Scottish and Irish folk music (Westerness and Patrask). Lately he has also evolved a growing interest in Americana, in particular Texas Country and Cajun. Or as he puts it: "I have picked the feeling from Country, the sound from Tex-Mex, the sense of freedom from Irish folk music, the swing from Cajun and some attitude from Rock music."

Songwriting with international co-writers
In 2015 Lazy Afternoon will release seven singles with new material. The lyrics address general human themes as nature experiences, love, longing to start over in life and grief. The songs have been written during a period when Ahlbertz has developed his songwriting, not least through collaboration with international songwriters, for example Nashville based Tom Kimmel and David Llewellyn. The repertoire also includes songs from Ahlbertz solo album from 2013 as well as some standards.

Long experience from club- and festival scene
The band's composition has evolved organically over the last two years. Jörgen Ahlqvist contributes with an accordion playing rich of nuances and guitarist André Kristiansson with perfect country licks. All members are experienced live musicians. Bo Ahlbertz himself toured frequently on the club and festival scene during the 80´s and 90´s.

LAZY AFTERNOON
Lazy Afternoon was founded by Bo Ahlbertz in order to play the songs from his solo album (2013, Artache) live. Since then the material has been expanded to include eight new songs recorded last year. The songs are released as separate singles during 2015.
Line up:
Bo Ahlbertz – vocals (lead), guitar and Irish bouzouki
Jörgen Ahlqvist – accordion and melodeons
André Kristiansson – electric, acoustic and slide guitars
Stefan Magnusson – bass and vocals (harmonies)
Mattias Svensson – drums
Influences: Texas Tornados, The Band, Little Feat, Ronnie Lane
Releases: The singles "Any Road" and "As Time is Passing" (2015, Artache)