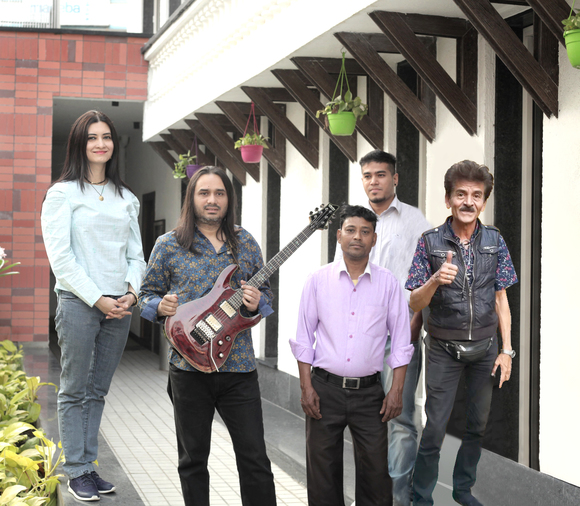 A brief Bio about Krosswindz- Krosswindz is a Bengali Rock/Folk-Fusion band, based in Kolkata, India.

They have performed their unique music all over the Globe to wide acclaim.Krosswindz is the only band from Asia to win 2 awards at the recently concluded Grassroot Grammy Awards held in Indianapolis IN,USA in 2020, they won Best International Group and Best Asian Album respectively.Krosswindz have helped urbanize the folk music of Bengal with Rock and Fusion overtones, and made it popular with their signature world music touch. Krosswindz is one of the few Kolkata based Bengali Rock bands that have a female singer on lead vocals. The band was formed in 1990, and started out playing at college festivals and eventually now on to big arenas over the world.
.
Krosswindz have also won the Album of the year from the prestigious Indian Music Awards-The Mirchi Music Awards for the years 2012 and 2016.

KROSSWINDZ are the first band from the eastern region of India to release an album of English language originals from a major label- (BMG) way back in 1993 titled SINGLES. They have also released full-length English original albums titled ONE WORLD and The Secret Album released in 2002 and 2010 respectively . They also have releases from RSJ records Delhi , Chandrani the lead singer has originals that were featured in the wildly popular CDs GIR vol 1 and 2(The Great Indian Rock). Krosswindz have 9 albums in their regional language Bengali which are hugely popular all over the globe.

They have toured the US several ties-playing for The Sandusky Radio unplugged concert series in Seattle, along with playing concerts at the following cities-Los Angeles, San Fransisco, Chicago, Jersey City, Atlanta,New York,Dallas,Austin,Tampa,San Diego,Sacramento and Boston.Krosswindz have also toured in Europe in and the South East Asian countries of Vietnam,The Philippines,Bhutan and Thailand