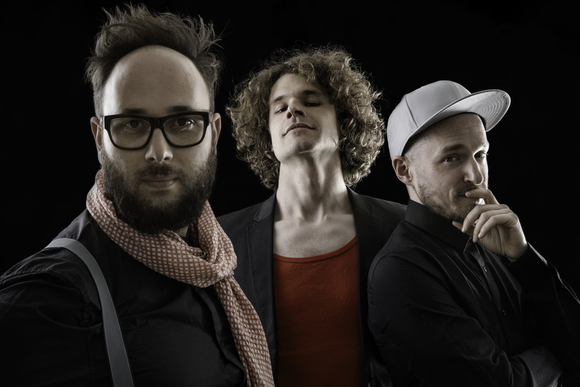 The world sinks into chaos, and we provide the soundtrack!

Pointblank and in your face, with a tender kiss to the cheek. Hard but heartfelt!
The three musicians that comprise KAOS-Protokoll could not be more different. Avantgarde Rock meets free improviation and pairs with the rythmical foundations of Black Music . The three fearleassly pioneer their way through the pathless terrain of the contemporary, multi-stylistic musical jungle, and at that without getting lost.

KAOS-Protokoll offer a fiery package live on stage, are tongue-in-cheek and bizarre all at once and will make pearls of perspiration appear on your forehead.

The band was formed in 2010 under the banner of "no concept as concept." Their first official live appearance was at the JazzWerkstatt, in early 2011, where they left their audience dumfounded and enraptured. An extensive tour of Germany followed shortly after, during which the band created the sound protocol for their debut LP, entitled Quick & Dirty, which was released in 2012 by WerkStattRecords, the in-house label of JazzWerkstatt.

The band has been on tour ever since – playing in Germany, Austria, Ukraine, France, Italy, Russia, and their native Switzerland. They appeared at the prestigious Cully Jazz Festival, Jazz Bez Festival, Jazzmeile, and Jazz Contre Band Festival to name a few. In summer 2015, they entered the studio again, this time under the guidance of composer-pianist Django Bates, and recorded their sophomore record entitled Questclamationmarks. Their future is being written as you read this.