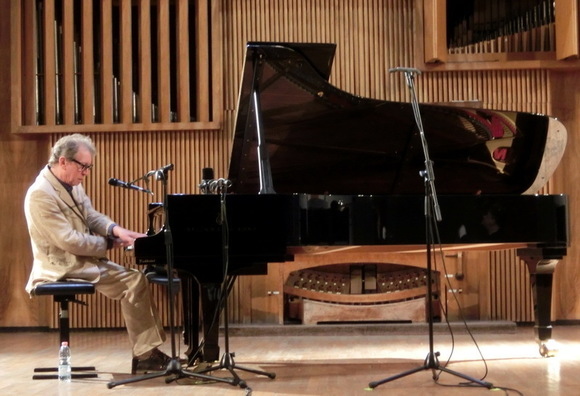 John Greaves New record "Piacenza" to be released on Nov.

The man, the piano, the voice. Some twenty songs going spanning a career of fifty years. A journey from Wales to Liverpool, London, Cambridge, New York, Paris. The adventure is in the music, the story in the lyrics. Songs of youth, songs of experience, romantic, rebellious, funny and sad. Greaves unravelled and vulnerable. Confidential.

"Born in Wales, and now a French resident, John Greaves is an artist out of the ordinary: eclectic, prolific and firmly independent.
He has played with the greatest: Carla Bley, Robert Wyatt, participated in unclassifiable ensembles (Michaels Nyman, Peter Gordon, Peter Blegvad), not to mention his fundamental part in historical progressive rock groups such as Henry Cow or National Health. As always, he is an activist of Music (with a capital M) and nowadays he easily makes the transition from trip hop to rock, from cabaret to jazz.(...)Musician of his time, a unique and endearing singer, John Greaves embodies the most beautiful of utopias. Refined melodist and a skilled musical risk-taker, he breaks the established codes and turns the avant-garde into an accessible genre." Pascal Bussy

THE WIRE (UK) “It’s hard not to recall John Cale’s work, less because of their shares Welsh origins than their shares ability to make grand statements using simple conceits and materials."

THE NEW YORK HERALD TRIBUNE (US) “A left-field Elvis Costello”

LE MONDE (FR) "one of the greatest British musical personalities in jazz and singing."