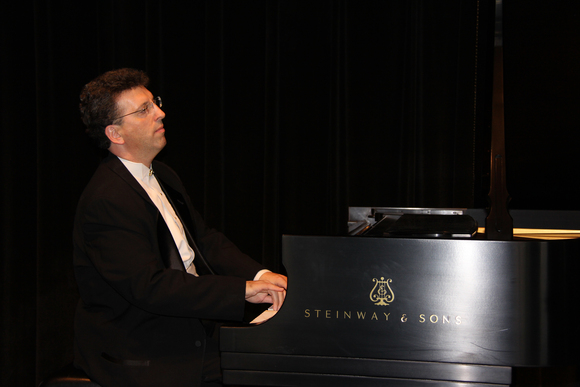 Considered one of the great pianists of our time, Jeffrey Biegel has created a multi-faceted career as a pianist, recording artist, chamber music collaborator, composer and arranger.

His electrifying technique and mesmerizing touch have received critical acclaim and garner praise worldwide. His most recent venture is the creation of the Dicterow-DeMaine-Biegel piano trio, joined by violinist Glenn Dicterow and cellist Robert DeMaine. Known for his standard-setting performances of the standard repertoire, Mr. Biegel recently performed two premieres: Lucas Richman's 'Piano Concerto' with the Knoxville Symphony Orchestra, and, Jake Runestad's 'Dreams of the Fallen' with the Louisiana Philharmonic Orchestra and Symphony Chorus of New Orleans at the National WWII Museum on Veterans Day 2013. Also a specialist in the music of George Gershwin, Mr. Biegel is a new member of the touring ensemble for the staged extravaganza, "Here To Stay: The Gershwin Experience" with Sylvia McNair, Ryan VanDenBoom and David Snyder, taking the show to symphony orchestras worldwide. In ongoing commissioning projects of new works for piano and orchestra, Mr. Biegel performed two world premieres with the Pacific Symphony Orchestra, conducted by Carl St. Clair: Richard Danielpour's 'Mirrors for Piano and Orchestra', and, William Bolcom's 'Prometheus for Piano, Orchestra and Chorus'. Mr. Bolcom's work was also featured in a 'live' global webcast with the Detroit Symphony Orchestra, Leonard Slatkin conducting, with Beethoven's "Choral Fantasy". Extending his hands into the crossover world, he performed the premiere of his adaptation of pop legend Neil Sedaka's 'Manhattan Intermezzo' for piano and orchestra with Orchestra Kentucky, and performed the World Premiere of Ellen Taaffe Zwilich's 'Shadows' for piano and orchestra, with the Louisiana Philharmonic Orchestra, commissioned by eight orchestras.

In January 2014, GPR Records released Mr. Biegel's all-Chopin recording, "Life According to Chopin", distributed worldwide via Naxos. His recent recordings include 'A Grand Romance' (2013), 'A Steinway Christmas Album' (2011) and, 'Bach On A Steinway' (2010) for the Steinway & Sons label; Leroy Anderson's 'Concerto in C', conducted by Leonard Slatkin with the BBC Concert Orchestra, Ellen Taaffe Zwilich's 'Millennium Fantasy' and 'Peanuts Gallery', a solo cd of Vivaldi's 'Four Seasons' for Naxos; 'Classical Carols' for Koch and the Complete Sonatas by Mozart on the E1 label. His chamber music recordings include Kenneth Fuchs' 'Falling Trio' based on the novel, "Falling Man" by Don DeLillo, for Naxos, and, Glen Roven's musical adaptation of the classic children's book, "Runaway Bunny", with guest narrator, Welsh-born actress Catherine Zeta Jones.

The career of pianist Jeffrey Biegel has been marked by bold, creative achievements and highlighted by a series of firsts: He initiated the first live internet recitals in New York and Amsterdam in 1997 and 1998, and, in 1999, assembled the largest consortium of orchestras (over 25), to celebrate the millennium with a new concerto composed for him by Ellen Taaffe Zwilich, whose 'Millennium Fantasy for Piano and Orchestra' was premiered with the Cincinnati Symphony Orchestra in 2000. He also transcribed Balakirev's 'Islamey Fantasy' for piano and orchestra, premiered with the American Symphony Orchestra in 2001, followed with Charles Strouse composing a new work titled 'Concerto America' for Mr. Biegel, premiered with the Boston Pops in 2002. He further arranged the piano part for Billy Joel's 'Symphonic Fantasies' in 2006, with performances at the Eastern Music Festival, the Boris Brott Festival and with the Indianapolis, Harrisburg, and other US orchestras.

Until the age of three, Mr. Biegel could neither hear nor speak, until corrected by surgery. The 'reverse Beethoven' phenomenon can explain Mr. Biegel's life in music, having heard only vibrations in his formative years. Born a second-generation American, Mr. Biegel's roots are of Russian and Austrian heritage. A Russian cousin, pianist Herman Kosoff, emigrated to the United States in the early 20th century, and had studied with the great Leopold Godowsky in Austria.