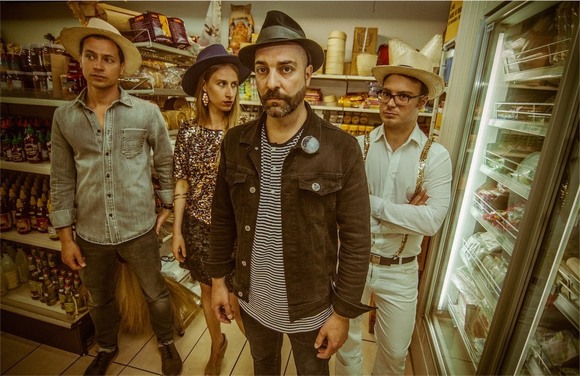 NEW SONG OUT APRIL 29TH 2016 ON JASHA!RECORDS *** SUELTA LA RIENDA *** WATCH THE VIDEOCLIP NOW *** A NEW ALBUM WILL BE RELEASED IN AUTUMN 2016 ON ASPHALT TANGO *** STAY TUNED *** There’s a point where the rhythm of the cumbia, the sound of Cuba and Balkan music all come together.

And it’s right in the heart of the Jaro Milko & The Cubalkanics. It’s a place without borders, wild and wonderful; it’s Milko’s creation, where surf guitar, Cuban son and the powerful hit of Gypsy brass dance side by side. The five-piece Swiss band fuse his vision into a unique, delicious whole on their debut Cigarros Explosivos!

Jaro Milko first put the Cubalkanics together four years ago, his own guitar along with organ, drums, percussion and trombone. “I was thinking of the people more than the instruments when I set the lineup,” he explains. “I knew I wanted a band with a different sound, and we don’t have a bass player.” But in trombonist Luke Briggen he has a secret weapon. “He actually plays some of the basslines. He has a pedal that lowers the notes by an octave. To me it sounds just like Balkan brass and that’s what I want.” With Eric Gilson’s organ picking up the rest of the bottom end, “which is very ‘60s,” they were set.

The Cubalkanics quickly began recording and playing shows to hone their sound. But they took their time to let it all develop, and the irresistible Cigarros Explosivos! is the result. The offbeat syncopation offers a nod to ska while keeping its feet dancing in Latin America, and many of the melodies and lyrics are homages to time spent in Cuba.