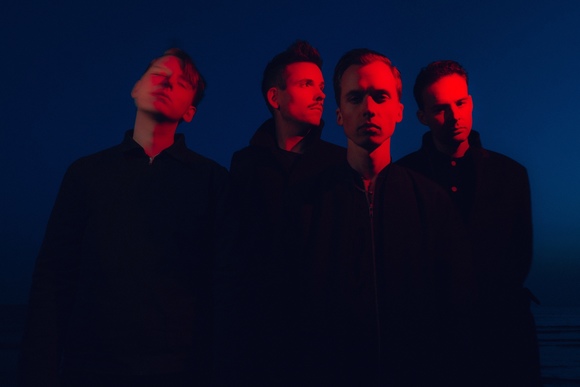 Despite their passion early on, the local music scene didn’t exactly embrace their creative difference with open arms: one day, the band arrived at the studio to find fake obituaries of each member’s name nailed to the front door. But from performing at Berlin Music Week and being active in the Swedish Club scene, Janice Prix have successfully established a place for their unique indie-pop within a town traditionally dominated by metal and punk.

With dark choruses and pop sensibility, previous politically charged single ‘Waking’ is far from what their native
town is used to hearing. The anthemic chorus and emotive lyrics make the political statement of the track even more profound. Inspired by the tumultuous narrative of refugees fleeing their war-torn homes, ‘Waking’ is a powerful testament to compassion and political awareness. Janice Prix expand their sound further on new track ‘Glitch’ – an impassioned elegy for victims of violence from the perspective of a brutal murderer. A haunting piano opens before a reverb-drenched electronic beat kicks in. This ominous start is soon accentuated by an unnerving vocal and distorted guitar samples that drift in and out. With a Wembley-worthy chorus, ‘Glitch’ reaches stratospheric musical heights with lyrical content to match. Elaborating on their new release, they said

”It’s a song inspired by the tragic events taking place in our hometown
of Trollhättan in 2015, where a masked man killed students and teachers with a sword in a racist attack. The lyrics revolve around the thought process within the mind of an assailant right after an attack. We wanted the melodies and gloomy soundscape to emphasize the concept of eternity and life sentence.”

Glitch is out on all platforms June 25.