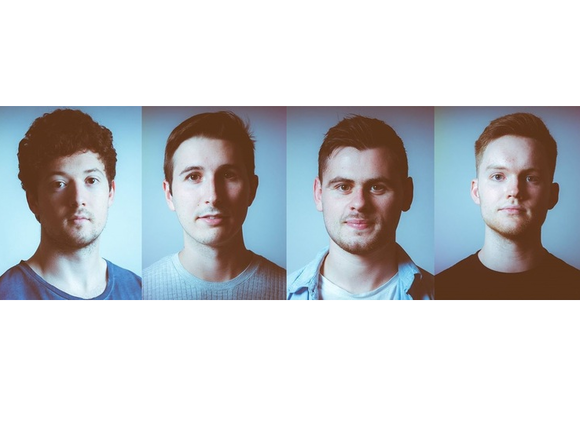 Hailing 3/4 from Northern Ireland (Niall Hanna, Eoin Bleeks and Thomas Bannon) and 1/4 from Bedford, England (Ross Haymes) they were brought together over a love of danceable indie, drawing on frontman Hanna's Irish trad background and tunings to give their music a truly unique sound.

Their music has been heard by millions thanks to the likes of BBC Radio 1 Introducing, 6 Music's Steve Lamacq and BBC Radio Ulster’s Across The Line all championing their music.

‘Dusk & Dawn’ is the band's second 4 track EP following on from their debut ‘Where To Start' in October 2013. Featuring former single ‘France’ voted best NI track of 2014 by Chordblossom.com, ‘Dusk & Dawn’ sees the band pushing themselves in every element of their music. From the upbeat indie pop opener ‘Closer’ to the funk drenched ‘Wake’ the band locked themselves away writing the most comprehensive tracks to date. Lead single ‘Dusk & Dawn’ showcases Hurdles ability to effortlessly combine addictive guitar riffs with smooth synth pop to a high polished degree.

'Hurdles' strengths lie in their intuitive command of what they do best: impressively executed, confidently delivered, increasingly compelling guitar pop' (BBC Across The Line)

‘Control’, the lead single from the EP, perfectly showcases their growth and passion for heightened live impact, as well as comprising nods to influences Phoenix and The Strokes.' (The Unsigned Guide)

'If Hurdles can maintain the standard set here on their next release, then it’s not a question of if but when they make it big.' (Golden Plec)