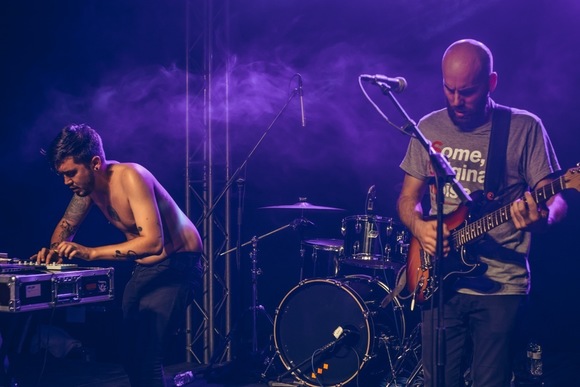 Cráneo Prisma and Thylakos Solrac records under the name Holögrama, using synthesizers to accommodate the most lysergic acid sounds and turn stained with nice melodies.

It’s also a little like Suicide (or Spacemen 3) but with a positive spin.

Holögrama’s debut album, Waves, was released via Trouble in Mind in 2014. Their second album “Gemini” has been released with Foehn Records at the end of 2016. A new album where the band continues betting on his pop with krautrock varnish and dreamy psychedelia.

Holögrama's first album, "Waves" (2014) appeared on the national scene as a real rarity: a bedroom project. Psychedelia and synth pop, performed by a young man from San Fernando and published by the interesting american record label Trouble In Mind. Spanish press doesn´t use to receive newcomers with warm greetings, and that was that happened with "Waves", in spite of Cráneo Prisma facilitiy to weave adhesive melodies, to draw oil from a minimalist sounds palette and using recognizable patches. So later the word of mouth, and the urge to play wherever possible (although not always accompanied by the situation), finally situates Holögrama in place: nowadays they are being raffled by festivals, their concert dates are multipliying, and plans to record new stuff are apiled on the table.

Also the guitarist Carlos Alcántara (who already participated in "Waves") has been full-time incorporated, who has collaborate to increase rich vocabulary. So, in "Magic inside" (Knockturne, 2015), a cassette recorded with David Cordero's supervision, the duo bordered roads near the ambient music. And of course in "Gemini", their second álbum, they show that progress we were talking about. First four songs (or, as Prisma likes to said, the album A side) represent the most pop face of the duo: a mixture of luminous psychedelia, mantra repetitions and enchanted melodies that had such a good result in " Waves". With the difference that this time the rhythms are more complex, sounds are less evident and the structures are always in search of the surprise. In this way, “Teenagers” surprises us with their aggressive guitar game and keyboard in tense, “Burgundy Coloured Mazes” puts the guys back in the territory where The Velvet Underground were filtered through psychedelia from eighties. “Interlude” shows their most ambient and space face and “Last Train” reveals itself as the little pop jewel of the álbum. Last song, “Endless circle” (the B side), talks about how Holögrama performs on the stage: fourteen minutes of static electricity, levitating keyboards and breakdown melodies around motorik beat. These are two sides of “Gemini”; two faces of a band that from now on, can only grow and grow.