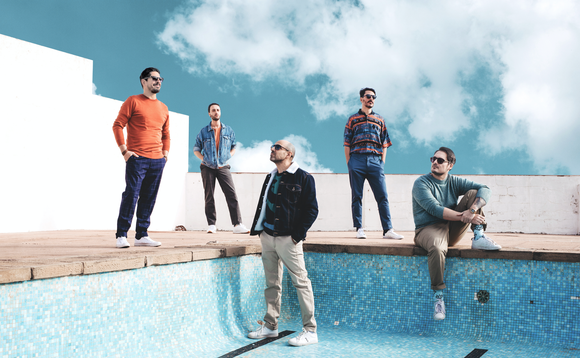 Hola Chica is a 5 piece indie-pop band from Barcelona.

Their sound has been influenced by bands such as Air, Metronomy, Blur, Foster The People or Pond. On a base of guitars and pop melodies, they add a good dose of synths achieving a fresh and danceable sound that is elegant and catchy.

They presented their debut album, “Magnetism”, in November 2016. Their first LP was recorded, produced and mixed at Blind Records in Barcelona (Mucho, Love of Lesbian or Sidonie). Their album and first video was well received throughout the key national music media, Mondo Sonoro, Neo2 Magazine, Jenesaispop and followed by radio performances on prestigious RTVE amongst others.

Hola Chica transfers their songs into live show by adding an extra dose of strength and psychedelia to create an evolving sound. In the last couple of years the band played in several cities such as Barcelona, Madrid, Valencia, Sevilla and Málaga, and in festivals like Taubertal Festival (Germany) and BIME Festival 2017 in Bilbao (Spain). They achieved 2 sold out concerts on the close of the “Magnetism” Tour in Madrid and Barcelona.

After a few years on the road, in February 2020 the band presented their new album MARBELLA, making another step in their sound development. Eleven songs covert with energy and a production full of details.

In 2021 Hola Chica starts recording new music and they will be rescheduling their shows for next summer.