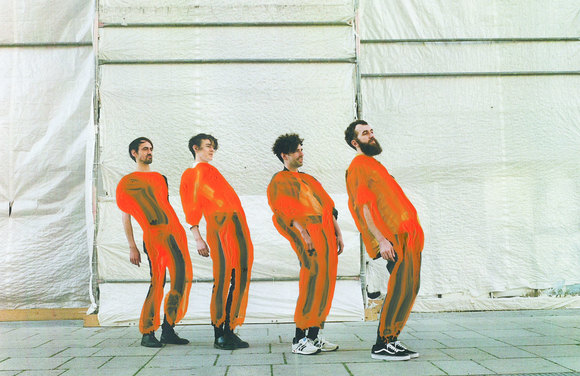 It was on the 1st of January 2016, during the release of their debut album, Young. Independently of each other, Peter Paul Aufreiter and Johannes Mandorfer sent sound snippets over to Hearts Hearts’ singer David Österle. Within the same hour, he’d received an aggressive jazzy piano loop - ‘Phantom’ - and an electronic drum take recorded overseas in ‘Island’ (the German word for the country of Iceland). Österle frantically began attempting to put these disparate pieces together; to synchronize what was never meant to be unified, and started singing over the results.

Though genre-wise no match at all, the fragments didn’t only end up as ‘Phantom/Island’ - the breathtaking opener to Hearts Hearts’ sophomore album
Goods / Gods - but the unusual process itself became the aesthetic basis for the entire record. The band‘s widened approach to disparate musical genres became the key element in the creation of eleven new songs. Hearts Hearts have cracked and evolved their electronic ballads and downbeat pop into something far more sonically expansive and emotionally soulful, driven by higher energy and a growing array of influences.

The chance meetings of unrelated options that inspired the writing and recording process is present throughout the titles of Goods / Gods. The record takes its inspiration from those in between spaces and undefined borderlines in meaning, symbolised by the slash in every title on the album. Hearts Hearts explore emotional and moral ambiguities on Goods / Gods,
taking aim at the ineffectiveness of the dichotomies and borderlines that define modern society in the process, preferring to “think in options” as Hämmerle puts it. The group sees the diagonal line of the slash symbol as representing an openness and flexibility in meaning; in similarity as much as difference.

Produced by mastermind Peter Paul Aufreiter, the new record conjures a mix of anguish and ecstasy, whether it’s the funky falsetto of ‘Sugar / Money’, or digital monster ballad ‘Do you often think about /’. Taking inspiration from the leftfield pop productions of Bon Iver, Jamie XX, and Son Lux, they skew addictive hooks into drippy song chambers, littering them with lucid samples and cybernetic production licks, conjoining contrasting elements with prisms of electronics and lush acoustic instrumentation.

Lead single ‘Phantom / Island’ and instant motoric pop classic ‘Goods / Gods’ are the most addictive and high-energy tracks yet from the quartet, blending groovier verses with increasingly majestic choruses. This is ultra-intelligent pop from a band that have found their true voice. Somewhere between happiness and sadness, energy and lethargy, electronica and rock - that’s where you’ll find Hearts Hearts.