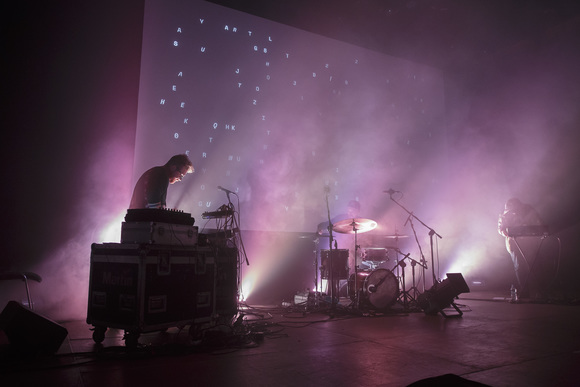 By gaining experience, he created his own vision of music, realizing it in his solo project. As Hatti Vatti, the artist presents another new face, in which electronic music meets live instruments.

Thanks to cooperation with other musicians, including NOON (as HV/NOON project), the leading Polish hip-hop producer, Hatti Vatti learned the secrets of composing electronic music. As Hatti Vatti, Kaliński presented the sounds of his workshop and his spectrum of inspirations on 2017’s ”SZUM” (“Hum”). The release, adorned with an amazing cover, is full of innocence and experimentation, which Hatti Vatti successfully translates into live concerts.

On the stage, Kaliński is accompanied by other musicians, synthesizers sounding alongside live instruments, bestowing an organic character on the music of Hatti Vatti. Consequently, listeners feel that what they hear isn’t the result of previously prepared material, reproduced onstage – the audience is experiencing the creation of electronic music live, in a hypnotic way. The visual effects enhance the feeling of eclecticism that fills ”SZUM”, proving that Kaliński is an extremely talented artist who has transformed all his experiences into a unique and engaging sound.

Hatti Vatti's cinematic take on bass-driven electronic music made that project recognized well on both Polish and global electronic music scene. Between 2016 and 2017 Hatti Vatti performed live in many countries in Europe, North America, and Asia.

The Quietus: „The record sees the producer combining a vast array of samples with his set-up of hardware and other tools, creating a record that covers numerous sounds, operating at times between ambient and bass-heavy genres such as footwork and juke”

The Ransom Note: „Hatti Vatti is an underground hero amongst an intricate scene. A musican with fine tact and attention to detail.”