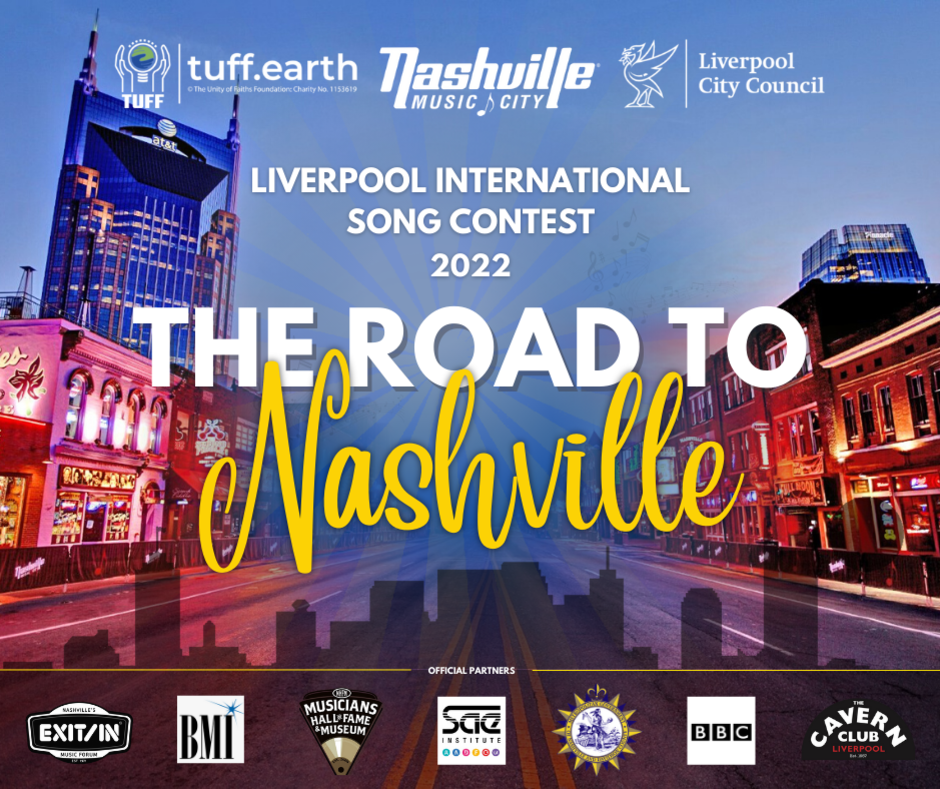 A global historic project has been launched, linking Nashville & Liverpool together to support musicians & songwriters by advancing mental health awareness while promoting diversity and understanding. Live-streamed simultaneously in both Nashville USA at 10:30 CST & Liverpool U.K. at 16:30 GMT on May 9, 2022, a press conference hosted by the BBC’s Claire Simmo announced a joint initiative by both mayors from the biggest music cities in the world. The mission is to advocate for mental health while also championing the search for the best songwriters worldwide.

The Road to Nashville - Liverpool International Song Contest 2022 is a seven-month project, which highlights original material by global songwriters & musicians with a unique infrastructure to support them with mental health services and counseling, as well as submitting their songs throughout the process of the international song contest.

With May marking Mental Health Awareness Month, the timing is perfect to ignite this initiative especially given the tragic news that recently struck the Nashville and country music community. The project kicked off May 9 with a live stream launch between Liverpool, hosted at the British Music Experience & Nashville, anchored at the Musicians Hall of Fame and Museum. Presented by The Unity of Faiths Foundation (TUFF), Visit Music City, and the Liverpool City Council, the contest was initiated in an effort to create a community of kindness spanning Liverpool to Nashville in the spirit of John Lennon.

As a display of the unity between the cities, the Mayor of Liverpool Joanne Anderson passed to Nashville Mayor John Cooper a special vintage microphone used by The Beatles when they performed at The Cavern Club in Liverpool. As a show of support from Nashville, a resolution was read by Metro Councilman Jeff Syracuse at the most recent Metropolitan Nashville City Council Meeting stating "that the Metropolitan Council hereby goes on record as showing their support for the Liverpool International Song Contest – Road to Nashville 2022."

Songwriters can submit their songs starting today with the final deadline set for August 31, 2022. The top ten finalists will perform live before judges in Nashville at the Legendary EXIT/IN on John Lennon's birthday Oct. 9, 2022. When writers are submitting their content for review in the contest, they will be presented with a prompt asking if they are interested in meeting with a mental health professional. Should they select that option, upon submission the TUFF team will connect with the songwriter to set them up with complimentary sessions with a life coach or psychologist.

Last year, the project took place in Liverpool U.K, receiving over 20,000 song submissions from 28 countries with over 6.7 million hashtags of their branded #Kind20. The top ten were chosen by experts from all the partners and the overseas contestants were also flown into Liverpool to perform live at the legendary The Cavern Club. The top prize for the inaugural contest went to James Holt for his song “Make My Day.” To view the ITV News profile on James and his performance at The Cavern Club, click here.

TUFF is the British charity responsible for the project and also serves as the bridge between Nashville & Liverpool. Dr. Shamender Talwar, co-founder of TUFF says, "We are very honored and proud to be a bridge of togetherness between these wonderful musical cities. Many thousands of musicians/songwriters could be supported through our joint project."

“It’s Mental Health Awareness Week in the UK. What a fantastic mission to be supporting. Liverpool is a city of music. Building a relationship with Nashville is exciting. We are looking forward to a long-term relationship. I’m also looking forward to getting to share a message of love and hope,” says Mayor of Liverpool, Joanne Anderson.

“I am so happy to join you at our great Musicians Hall of Fame and Museum. For the first time, two mayors are collaborating to launch a music and mental health initiative. Thank you to The Unity of Faiths Foundation, the bridge of unity between Liverpool and Nashville. Music is in Nashville’s DNA. Two years ago, the pandemic hit Nashville and the music was temporarily silenced. Now, we are back and louder than ever, but the human and emotional recovery has been difficult. We have seen an increase in depression within our entertainment industry. Quite recently our community lost the world-renowned and multi-talented Naomi Judd to mental illness. This is a real issue for individuals in this industry. I am grateful that Nashville and Liverpool are shining a light in this topic and coming together to combat the stigma often associated with mental health. This can save lives,” says Mayor of Nashville, John Cooper.

“Nashville is known around the world as Music City, and songwriters are the heart of our creative culture,” says Deana Ivey, President, Nashville Convention & Visitors Corp. “We are honored to partner with our friends in Liverpool to bring awareness to the mental health needs of our music community here in Nashville and to songwriters worldwide. For years there has been a kinship between Nashville and the UK – going all the way back to the 1970s when Paul and Linda McCartney spent six weeks here writing, recording, and visiting the Grand Ole Opry - and it continues today with music collaborations of all kinds. We are grateful to be a part of a transatlantic collaboration like this one that will have an impact and make a meaningful difference.”

“It all starts with a song and the next step is a small stage like the one at Exit/In and The Cavern Club. Exit/In is thrilled to welcome songwriters from all over the world this October 9th, on John Lennon’s birthday, as part of this incredible initiative for mental health,” says Chris Cobb, Owner of the Exit/In.

“Music is part of the cultural fabric of both Liverpool and Nashville. Two cities with one heart for the mental well-being of the world’s creative citizens. I’m proud to be a part of this momentous effort of kindness,” says Shannon Sanders, Executive Director of Creative-BMI Nashville.

“I spent three years, 2006 to 2009, attending the Liverpool Institute for the Performing Arts. When I was over there, I had never felt more at home by the Liverpool people. You are combining two magical cities because music is at the heart of both of them. One of the biggest songs of my career was written in Liverpool called ‘I Make My Own Sunshine’. I was going through a tough time being far away from my family when I wrote that song. This is such an important cause. A song can change your life, it can change your perspective, and it can change your mental health in an instant,” says Alyssa Bonagura, recording artist, songwriter and graduate of LIPA.

“I’ve been here four years now and sport and music are so similar, and Liverpool and Nashville are so similar. This is such a giving city as is our hometown. I am really excited to see something else from Liverpool come here,” says Ian Ayre, CEO of Nashville Soccer Club.

A global historic project has been launched, linking Nashville & Liverpool together to support musicians & songwriters by advancing mental health awareness while promoting diversity and understanding. Live-streamed simultaneously in both Nashville USA at 10:30 CST & Liverpool U.K. at 16:30 GMT on May 9, 2022, a press conference hosted by the BBC’s Claire Simmo announced a joint initiative by both mayors from the biggest music cities in the world. The mission is to advocate for mental health while also championing the search for the best songwriters worldwide.