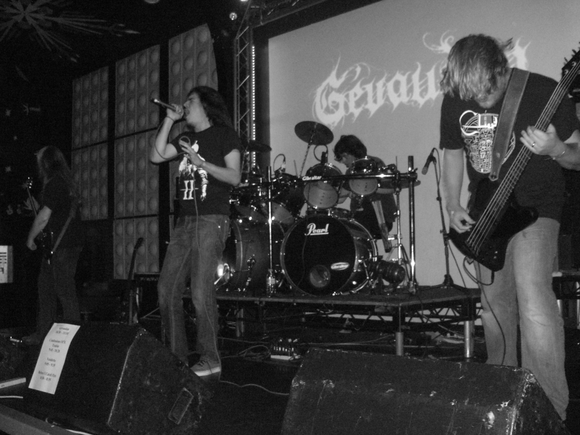 Gévaudan are a UK Doom metal band influenced by the likes of Candlemass, Goatsnake, Black Sabbath and Electric Wizard.

They deliver heavy, crushing riffs and much like the fearsome historic tale that provides their namesake, the band’s live set creates an atmosphere of dread and gloom.

Their sophomore release, Litost (Nov 16), shows the evolution and directional intent of the band. It delivers three tracks of heavy doom filled riffs themed around isolation, emotional loss and madness. This has been well received by both press and fans alike.
​
The four piece formed through 2013 with a desire to write heavy original music, the band comprises of Adam Pirmohamed (vox), Bruce Hamilton, (Guitar), Andy Salt (Bass) and David Himbury (Drums). The band give a thunderous live delivery, taking their pound of flesh from their audiences by the time they reach the end of their set.

Having shared stages with the likes of Bossk, Cruachan, Alunah, Samothrace, Sea Bastard, Ohmms, Witchsorrow and Slabdragger, they featured at 2016’s Doom Over London festival and will appear at 2017’s Hammerfest (HRH United). The band is currently gigging throughout the UK. With a growing fan base they are starting to receive label interest and support for their work and are always very well received by the metal fraternity.
​
LEND THEM YOUR EARS – THEY WILL CRUSH THEM

“Wow…Gèvaudan were bloody brilliant – absolutely blistering riffs that tore The Unicorn apart. This is really heavy stuff that I could not get enough of” Metalmouth (Live)

"..one of the most interesting, talented and diverse bands currently in circulation in the UK" Doom-Metal.com

“Epic without embracing pomposity, Gévaudan have a canny knack for making the vintage sound vital, a throwback to the days of expertly constructed sojourns into hypnotic storytelling and palpable atmospherics.” Worship Metal, (Litost)

“…strong of riff, and epic of vocal, Gévaudan sound like they've been holed up in a recording studio fuelled by only psilocybin and the first three Candlemass records.” Zero Tolerance Magazine

"...a cut above most bands operating in this genre" - The Sludgelord