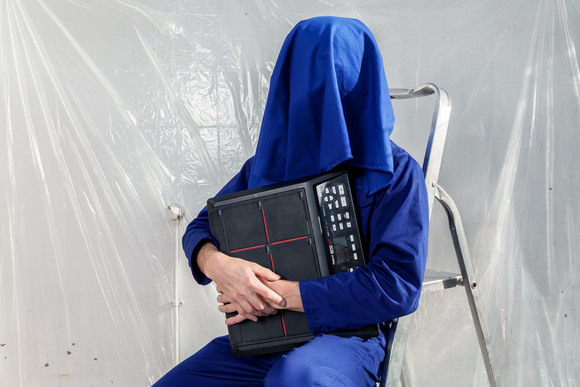 Flo/so is the solo project from producer and instrumentalist Florian Sauvaire, created in 2020.

Back in his country after 11 years spent in London, the Frenchman mixes hypnotic beats with ethereal vocals, in percussive compositions blending pop and electronic genres (techno, synthwave). Fascinated by the warehouse party scene in the UK, Florian has one goal in mind, make the audience dance in the tradition of his predecessors Jamie XX, John Hopkins and Caribou.

BBC Introducing, who has supported the project from the start, regularly broadcasts his first 3 singles and has invited the artist to record a live session in spring 2021. His single ‘You’ was also recently featured on the Netflix series Elite season 5, and added to their Spotify editorial playlist.

In between lockdowns, Flo/so has performed as a support act for W.H.Lung and James Alexander Bright (K7 Records) in the UK, and more recently at MIL in Lisbon, Les Trans Musicales in Rennes, and a showcase for les Inouïs du Printemps de Bourges.

Since 2009, Florian Sauvaire has also worked with various artists, either as a touring and studio musician or as a producer (Ghostpoet on his first album shortlisted for the 2011 Mercury Prize, Roxanne Tataei, Will Joseph Cook, Pillars). He also formed the duo Deafkid with Christopher Lockington, whose early fans include the band Alt-J. Their songs have often been played on BBC Radio 1, BBC Radio 6 Music and reviewed in major media such as NME, Clash and DIY.

In 2021-22, Flo/so is one of 9 Slash artists (selected from 180 applicants), a programme dedicated to emerging songwriters and producers, supported by the European Union and Sacem.