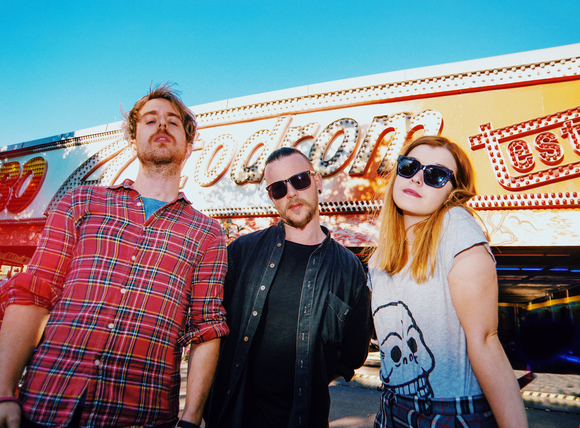 In the grand scheme of young bands to care about, Manchester-based alternative trio, False Advertising, present a tantalising prospect.

With three years together spent bubbling under the surface of the UK music scene garnering kudos for their chaotic live shows and self-made releases, their niche is now carved, and the stage set for something much bigger in 2019.

Rounding off last year with a full page feature in NME which praised their brand of slacker-rock as “delightful”, 2018 has seen the band hailed as a certified “band’s band”, with Robert Smith (The Cure) personally inviting them to play his own Meltdown festival, Steve Lamacq praising their ferocity upon catching their SXSW set, PRS awarding them Momentum Funding, Everything Everything endorsing them as “their favourite new band” live on Radio 1 and guitarist Jen Hingley being voted 8th ‘Best New Guitarist In The World’ by Total Guitar.

The band are gearing up for their new album campaign (set for release in 2019) which was recorded at Paul Epworth’s Church Studios. You Said is the first taste of this forthcoming chapter, further fueling the growing buzz surrounding the band and already racking up 60,000 plays on Spotify in the two weeks following it's release.

Venting heightened emotions of united frustration, whilst deftly mixing grunge with alternative rock. Lyrically half-pop-culture-junkie, half-moronic-anti-anthem, the instrument-swapping trio’s songs are laced joyful catharsis and dissonance, their rotating line up of front-person and drummer fostering both inclusivity and unpredictability.

“Raucous, accessible and with plenty to say, False Advertising are more than worthy of their hype.” - For The Rabbits

"A really, really tight, ferocious three piece, you should check them out.” - Everything Everything (live on Radio 1)

"They deliver the kind of riffs that will have fans of '90s alt-rock digging plaid shirts back out of wardrobes.” - Total Guitar

“False Advertising continue to show us all exactly why they're one of the hottest new bands to keep your eyes and ears on.” - Popped Music