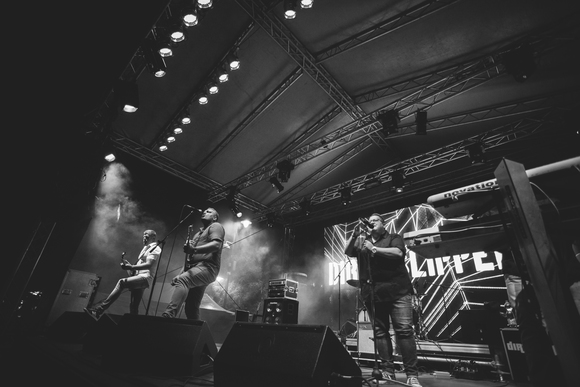 The still shamelessly young guys started as teens and as a pay off the hard work and some luck their fourth concert was already given on the famous stage of Petőfi Hall.
In 2009 they got into the public with their hit "Élned kell", which is the cervical cancer against campaign’s anthem in Hungary. Then came the music video hits, "Te vagy a fény" “Hang vagy Jel" and "Egy a vége" were sang throughout the whole country.
In 2012, the album "Közel hozzád" was recorded in USA, produced by Madonna’s and the Oasis producer George Shilling and in the first week of the release, it got to the top of MAHASZ hit list. The band's fan base suddenly increased since 2009, all the way to present day Dirty Slippers is the permanent guest music band for the Republic and they fill arenas and festivals together. They made international success with their three Europe tour, first with The Coronas (Paul McCartney’s favourite band) then with Romanian rock legends Resident EX, and last time The Last Vegas (discovered by Guns N Roses).
The overwhelming successes of live concerts, hit songs, the support of the huge fan-base made them one of the most wanted and famous band in Hungary.
The second album “Múzsa” had been released in 2015. The album received positive feedback from the music critics and the audience too. As a proof they led the hit lists for weeks and they still on tour with it.
2018 brought more success to the band. Everything started on their tour in April they played in front of a large number of audiences and filled the tents. In June, they released the third album “Kitűzöm a zászlót”, with 10 new hit songs.
In September 2018, the band made a historic success, as the first hungarian band
were invited to the biggest music festival in Romania, Arad Open Air. Where they had the opportunity to play on the main stage before the well-known musician Goran Bregovic.