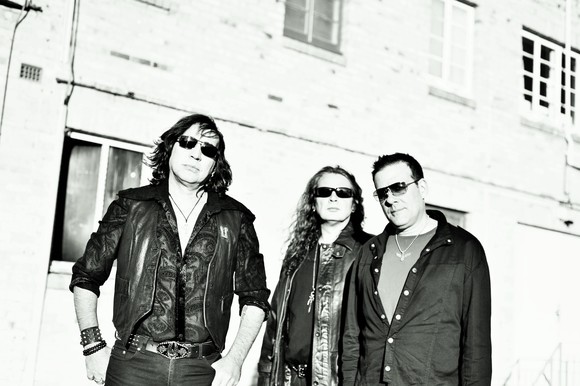 New Australian Hard Rock band DETH ENEMY delve into the dark of a world arching into the abyss to split it with light, taking a stand for the soul once and for all.


DETH ENEMY is the brainchild of the Caiulo Brothers (vocalist/guitarist Al and drummer Frank) and emerged from the blistering heat of an Australian afternoon, amidst the roars of a quiet jam session turned bedroom bound arena show (at which the band belted out what was to be their first song ‘Disciple’).
The band’s slick but shrieking sound swooned across from the speakers with a heavy metal grace to match the sound of early Sabbath, the ricocheting riffs of swift guitars as Al’s fingers sifted through the frets, the thunder thuds of drums Frank’s fists pumped and thumped tirelessly down into, the war cry wail of frontman Al shouting out for every soul to hear, reached around the studios of London’s multi genre producer/engineer Tom E Morrison (Underworld, Bliss, Bonnie Tyler, Andrew Roachford) who was riled in by the raw nerve verve of the band and inspired to produce and put his magic touch onto their stunning Debut.
DETH ENEMY are a brave new wave of Hard Rock, penning tracks touching on the listing line between life and death, the empty of loss and the full of love, the gore glossed guise of Black Metal gone, the false stripped from the fact, ripping the misery from the man chord by chord, note by note, throwing the hope rope out to a society swimming in ruins.
Having signed to independent UK Label Big Sky Song Records, the band is about to set sail from Australia, embarking on DETH ENEMY’s second European tour which kicks off in Germany, Holland and the UK in September/ October of this year, promoting the release of their rip-roaring and devastatingly addictive debut Album ‘UNMOVABLE’.
Release Date is set to 25th September 2015. Their hard rock sound truly harks back to the time of peerless powerhouse bands like Black Sabbath and Iron Maiden, only they strip the sin back from the sound like paint thinner, black being bleached back to white, dark dripping away to light, the sublime of the Hard Rock mainstays' sound still intact. Hard Rock is back, and not only does it have a new face in the form of DETH ENEMY, but it has a new place too: your headphones.