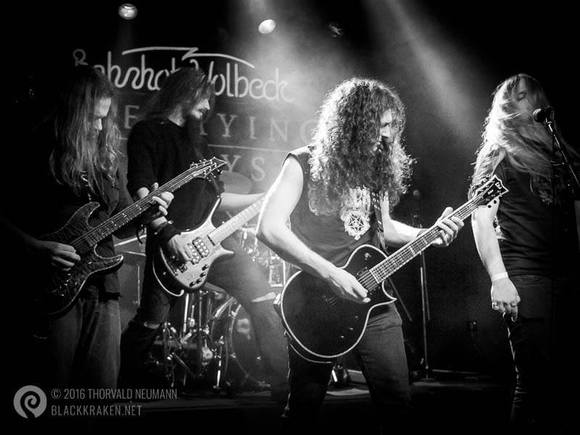 "I will not leave this place, be a reminder, that our home has not always been an empty world" Back in 2010 in vocalist Manuel and drummer Nico founded DECAYING DAYS in Münster, north-west germany, to shape their musical passions in the rehearsal room.

Some time and changes went by, until the release of the first demo-tape in 2013. Later in 2015 the current line-up with Daniel and Tobias on the guitars and Hannes on the bass guitar was consolidated.

Initially driven by the dark energy of finnish Death-Doom, the last two years of songwriting expanded the versatility of their universe of sound. Severe riffs and memorable Melodic Death Metal-melodies in ‘Waves of neglect’ accompany with endtime-elegies of ‘Empty world’ and progressive trips and acoustic-guitars are giving drifts of the 90ies-Opeth aesthetics. DECAYING DAYS are entering even more new terrain, when death-growls and polyphonic clean-vocals build a symbiosis in ‘A long way down’.

In collaboration with Jörg Uken (known for productions with God Dethroned, Dew-Scented among many others) the band spent a good time recording at the Soundlodge-Studio to finish their first album.

On 17th march 2017 DECAYING DAYS will release their first album “The fire of a Thousand Suns” world wide managed by the band themselves. The artwork has been designed by the band aswell to ensure all of the creative aspects of the Album is 100% DECAYING DAYS.
credits
released March 17, 2017