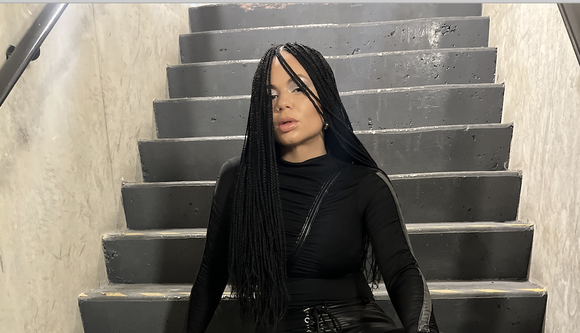 AGAAMA is an artist, composer, vocalist and producer.

Fusing experimental pop, with dark ravey beats and jazz-influenced vocals, AGAAMA draws you in with sonic energy that moves fluidly between haunting melodies and electronic instrumentalism. Their childhood listening to metal music plays a central role in the production and energy of her music. Recent single which way won support from Mary Anne Hobbs at BBC 6music as well as playlist love at clash, dummy & loud & quiet. The guardian and the observer have also praised the work of AGAAMA and the sonic world they create.
AGAAMA grew up in Birmingham UK in a British-Jamaican household with eclectic musical tastes. Their imagination was first captured by their dad’s contemporary classical vinyl collection and their mother's love of Sarah Vaughan and Quincy Jones. They took singing lessons as a child at a theatre school in Birmingham, finding a space to channel their hyperactivity.
Music continued to be an outlet. She studied classical trombone as a teenager, spending their weekends raving to UK bass music, following sound systems, in the middle of the mosh pit at metal gigs and then singing in church on Sundays. From their teens, she was exploring music production and fronting metal bands, inspired by the performances of theatrical front women like Stevie nicks, Kate bush and Big Mama Thornton. She also recently performed their own songs alongside BBC symphony orchestra, collaborating with musical director Jules Buckley for inside classical.
Influences range from: Yves Tumor, Arca, Sevdaliza, Bjork, to the likes of Tool, emphasising AGAAMA's metal background. Brooding yet hopeful pop songs in amongst dark basslines and heavy beats, accompanied by orchestral horn arrangements, set within modern production. The tracks build in energy and tension reminiscent of prog rock, metal and UK bass music. Poetic lyrics lead by powerful, intimate, virtuosic vocals.On the new EP, AGAAMA flexes their skills as a writer and producer, collaborating with producer Alex O’donovan. With each track, listeners quantum-leap through internal worlds on a journey from fear towards love. The journey of the human spirit. Brooding yet hopeful pop songs in amongst dark basslines and heavy beats, accompanied by orchestral, electronically warped horn arrangements. Listeners enter a world that is both calm and chaotic, familiar, and unknown.
Wandering worlds explores spaces literally, personally, and collectively. Exploring the literal green spaces of London and Birmingham, stepping into different emotional states on the journey from fear to love and how this connects to the tipping point we currently occupy as a species. The hope is that the listener will journey through these worlds, each track taking the listener into a different space. With each track being a mini world where you can express and release positive or negative emotions.
As AGAAMA says, “I grew up listening to a lot of angsty, heavy music - metal, dubstep, prog rock and bass music. I wanted to make something where you could explore angst and frustration. I found that having a space to release angst within music was healthy and helpful on my path toward healing. I loved being in mosh pits and skanking with my friends until 6 am. I really wanted to incorporate this brooding, meditative, almost primal thing that hooked me into music. At the time of making the record, I lost complete interest in beautiful sounds and music. I was craving something darker and heavier.”
‘wandering worlds’, their second ep, follows debut ‘safe in noise’ which received extensive support from Gilles Peterson's worldwide fm, MOBO trust, PRS foundation and many others.