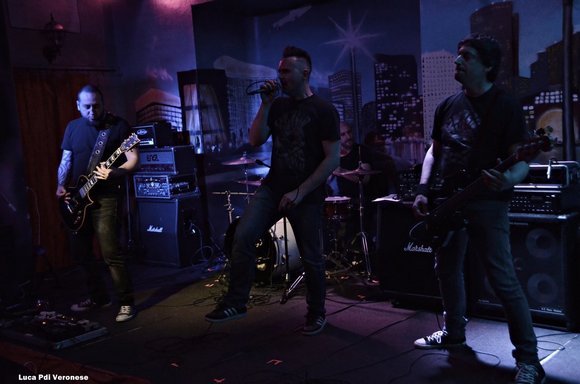 Blind Marmots members have been playing in the '90s in hard-core, grunge, metal and cross-over bands of Italian underground scene.

Starting with the aim of playing stoner rock and hard rock, they soon get overwhelmed by individual oddness, creating a fresh ground of stoner, sludge, noise, grunge and psychedelic metal, a kind of overwhelming crossover, or rather "CrosStoner".
In the summer of 2011, Carlo Toffano (lead guitar) flips a power trio with Pazzeo Stefani on drums and Nic Manno on bass, then with Thomas Corelli on guitar and Stefano De Biaggi on vocals.
Pazzeo however, shortly leave the band replaced by Lorenzo Breganze, with which begins in February 2012 an intense live activity.
Breganze also leave the band early in 2013 and Ennio Campanaro come up on drum, which remains just over a year, a period in which he gives a strong rhythmic impression to the band.
Shortly afterwards, Biaggi leave, but the band settle down in 2014 with the arrival of Ale "Teuvo" Segantin on vocals and Luca Cammariere on drums.
During 2014 Blind Marmots releases his first studio album called “Blind Marmots”, live performance activities increase and the band will join Padova MetalFest 2016 with H.A.R.E.M, Blizzard Huntee and Blaze Bailey.
In 2016 Thomas Corelli leave the band. In the meantime the band releases his well-reviewed second album "Spore".
In 2017 Nic Manno also leave the band, replaced by Matt Pawone, a very experienced musician and former bassist of Reeta Pawone, enriching the band's sound.
With the new line up and with Ale Teuvo also on guitar, the band is finally well set and has reached full stylistic and compositional maturity.