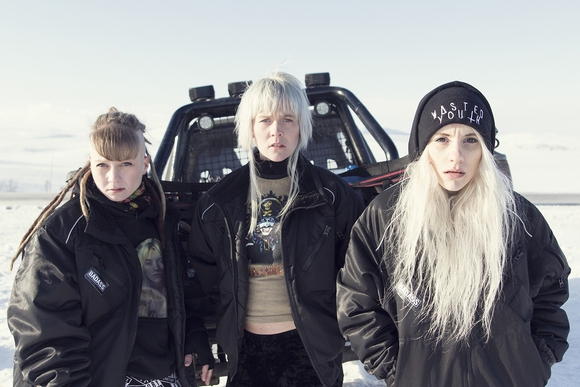 Biru Baby is a rock group from Sápmi.

"Biru Baby from the extreme northeastern point of Norway, Finnmark, sound just as outlandish as you would expect but while being unusual the music is alarmingly cohesive. The best way to describe this fantastic outfit is like System Of A Down being fronted by Yolandi Visser from South Africa’s Die Antwoord. (...) Their music videos penetrate your soul leaving you afraid to sleep in case these visions return to haunt your dreams. Nonetheless it’s generating reactions like this that make the band so memorable and extremely watchable. Track down their video for “Slutt Slut” for a highly visceral treat!"


Their first release 'Slutt Slut' (2014) is dark and angry, and their second release 'Fuck My Heart' (2014) is heartbroken and also angry, but these bitches from the cold north write songs with a happy party feeling too. The mission of Biru Baby is to shake things up with their Live Show and videos.

The members of Biru Baby are Hánná a.k.a. Hánnábitch, Iki a.k.a. Friki and KT (In Da House), and they perform live with a hot boy playing drums. Right now they are doing their thing with great enthusiasm. As one of the members put it: "We kinda woke up and realized that instead of being just a rock group, we should be a Fucking Rock Group. From that moment on we have been free!"