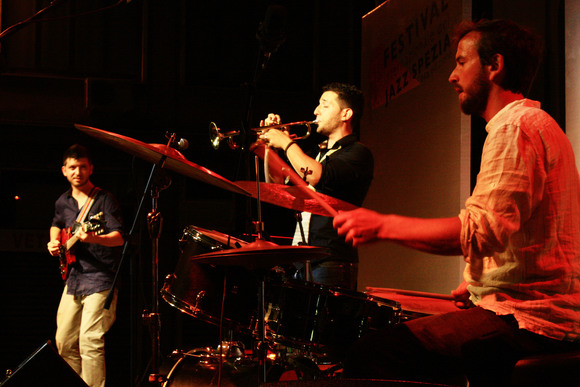 The Sanskrit term "bija" (seed) represents the source and at the same time the cause of all things.

It is the vibration and the primordial sound from which it all began. From this fascination, in 2011 Bija were born. This atypical trio, composed, somewhat by chance, of an electric guitar, a trumpet and drums, made the decision to create music according to their personalities without musical prejudices.

It is the very idea of orchestration and arrangement that is put into question by this ensemble. The result is a dense writing, inspired by different musical perspectives such as rock, classical, world and jazz, which constitutes the trio's musical backgrounds. Altogether, it reflects, a postmodern attitude that manifests itself in expressionist chiaroscuro, narrative melodies, odd times and warm sounds.

In 2012, before devoting themselves entirely to the writings and the production of their first album, the Bija composed the soundtrack for the short film “The Distracted Guardian” by director Marcello Ciullo.
As a result they took part in both festivals and contests such as Jimmy Wood Award 2012 in La Spezia (finalist), the B-Live contest 2012 (Critics Award), the Soundslices contest 2012 (first place), the Otranto Jazz Festival in 2012 and the JazzUp 2012 of Greg Burk. The latter got them the prize of “Band revelation of the year”. In April 2017 Bija won first prize at Multiculturita Black Music contest.

The album was produced thanks to a crowdfunding campaign initiated by the band on www.musicraiser.com