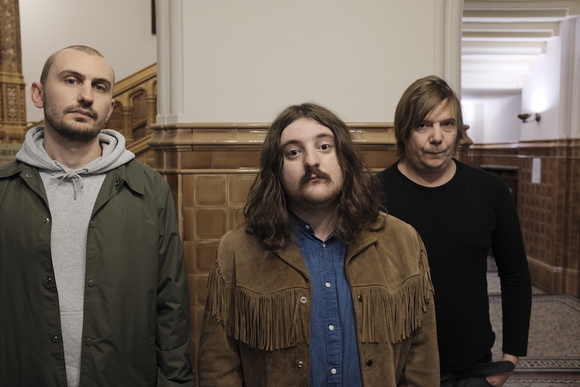 Thomas' previous output as House producer L'Étranger spanned a period of 6 years. However after going on tour in 2013 Thomas grew disillusioned with the electronic music scene.

In 2017 Big Tide self-released their debut 12-inch single “Half The
Time” which caught the attention of Clash Music and Norman Records.
Since being locked away in the studio recording an album, Ben has been joined by Drummer Ged McGurn of ‘90s Indie rockers Boyracer and bassist Tom Basri of former Leeds band Deadwall.

Thomas sings in his signature northern vocal style whilst shimmering 12-string guitars are the cornerstone of the Big Tide sound. Taking influence from bands like Big Star and Teenage Fanclub, “With Big Tide I’m focussing on songwriting,” Ben explains “I want people to feel a level of familiarity when listening to our songs. They have this wholesome feel good vibe which you don’t hear all that often nowadays”

Tied with Ben’s idiosyncratic lyrics and unique delivery, Big Tide take elements reminiscent of ‘60s Power pop like The Byrds, ‘70s Folk rock of Crosby, Stills, Nash & Young and blend them into something unique yet familiar.

The trio are currently unveiling their album to the public in their live performances.