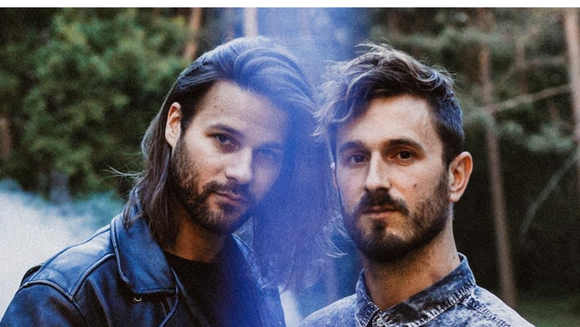 Imagine the piano, voice & drums child of Muse and 21 Pilots head-banging to hundreds of by-passers in the streets of Berlin, Germany as metal-tribal drum breakdowns, ultra heavy classical piano riffs and a lush deep baritone voice literally suck you out of your day-to-day life for an instant.

This is not unlike what stumbling across the heavy piano pop and self-titled duo BERANGER feels like. Born from a serendipitous meeting under the bridge at Alexanderplatz, Berlin in 2016, the duo made up of Todd James (drums) and Beranger Gras (vocals/piano) quickly went from playing to thousands in Mauerpark to selling out their own headline show at Lido Berlin, playing Lollapalooza Festival, Melt!Festival, Fusion Festival and more recently their very own Berlin Kesselhaus headline show and Germany-wide tour.

Both classically trained musicians from opposite sides of the world (Australia / France/ California), BERANGER 's uniquely classical-piano-inspired, but also heavy drums driven and sometimes dramatic pop anthems were very much part of a style that was never meant to see the light of day. An unintentional and subconscious act of rebellion against years of hard-pressed competitive classical training at the Conservatory & University, sublimated only by their love for heavier genres of music from Tool, Korn and Rage Against the Machine to Bach, Rachmaninov, Liszt and Chopin.

The result is a truly unprecedented myriad of piano-driven hit singles and freedom anthems that make crowds of thousands stage-dive, crowd-surf and sing their hearts at their shows. And creating this family community at their shows is what BERANGER are all about and cherish the most.

With their 1st ever self-released EP "The Kissed By the Light EP" hitting over 1 million + views on Spotify without any promotion, the duo is now working on a plethora of hard-hitting singles while taking the stage by storm with their incredibly high-energy shows.