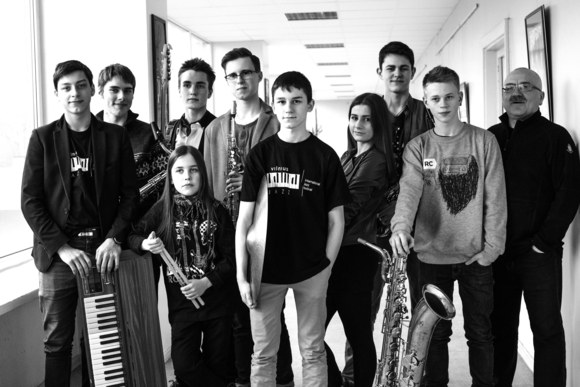 Jazz is generally considered as music for adult listeners and is usually played at venues late in the evening; it requires the mature passion of the artist and a certain intelligence on the part of the listener.

But forbidden fruit cannot escape the hands of curious and gifted young people! The jazz ensemble of Balys Dvarionas Music School ventures into the jazz music area with a wild abandon, is completely unfettered, but is very competent. Jazz for them is like playing their favourite game.

Founded in September 2012, the ensemble has included pupils studying both jazz and brass band, all of whom are active soloists in their own right, reaping awards at competitions and seeking excellence in performing. Despite its short existence the ensemble has built a solid creative biography. In 2012, it participated in the International Festival Vilnius Mama Jazz and the concert/marathon Didysis Muzikų Festivalis (Great Musicians’ Parade) organised by the Lithuanian Musicians’ Union broadcast live over public radio and television; in 2013, the ensemble were warmly received on the same stage as the Lithuanian National Philharmonic, won the Sąskambiai (Accords) festival and the Grand Prix at the Pavasario Trimitai (Spring Trumpets) festival in Plungė. The ensemble has participated twice in master classes of American jazz educators organised by the US Embassy.