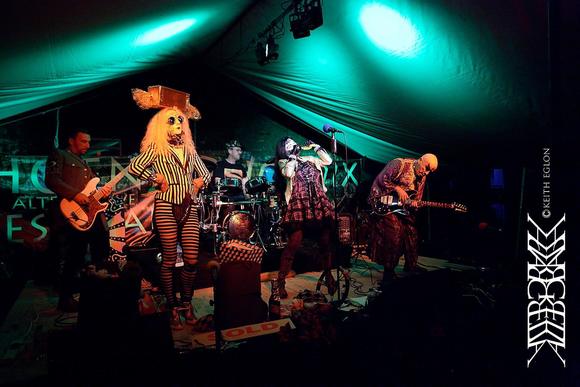 “One of the most complete stage presentations I’ve ever seen.

A head-on collision of art, theatre and music with the best stage show I’ve seen in years – wonderful back projections, dazzling lighting effects (particularly during ‘Lockstep’) and some absolutely barking props…. It’s like being parachuted onto the set of a Kate Bush video shoot but my word, the music comes from a very, very different place. I’ve never heard anything quite like the sound this band makes – an extraordinary mash-up of Psych, Goth, Jazz, Far Eastern and Funk – huge dollops of Funk – not Level 42 Funk either, heavy-as f**k Funk.”

“There are passing references to other bands, particularly Primus, Limbomaniacs and Pere Ubu but they are only snatches of memory in the overall uniqueness of the sound. The set, which heavily features music from their highly recommended CD/DVD ‘Singular Adventures In Post-Modern Capitalist Society’, is anchored beautifully by Jon Sharp on drums and James Alexander Dart on bass, laying down a thunderous beat throughout. And it needs to be anchored as well, because of the complexity of some of the music, and the wide range of anarchic stage antics from Alice and Karen. Even though this was a truly ensemble effort, I should mention that Karen Langley is one of the best singers I’ve heard in a very long time. Rob Williams, doing a very passable impression of Mephistopheles, solos fluently and effortlessly- the amazingly beautiful solo at the end of ‘The Lorelei’ was breathtaking. His bidextral work was unbelievably wild and thrillingly close to undisciplined. Aren’t you supposed to hunch over your guitar deep in concentration to play like that? Apparently not.

Alice the Worker, projects an integral presence as mime artist and dancer , responsible for many of the whackier moments in the set. This woman has a huge bag of props you wouldn’t believe – giant scissors, inflatable hammers, bricks, a couple of skulls, military uniforms, car steering wheels – used during the frantic ‘Speed’ – and toffees, huge toffees which are thrown into the audience during the relentlessly brilliant ‘Toffeetime’. She’s even got a toffee shaped hat… There were no gaps in this performance, nothing you’d change, nothing you could think of that would have improved it – how many sets have you seen that you can say that about? I head home buzzing like a Rampant Rabbit loaded with a new set of Duracells. Brilliant band .” Geoffrey Head – SLAP April 2016
Torrents of rhythm and cyclonic guitar;a soul-punk vocal with no stone unturned;Alice casts a fractured spell.That’s the way to do it!
Selecting, electing, expecting, rejecting, directing, collecting, correcting, digesting,becoming. Moving from 2016 into 2017 with tales and crazy compilations from around the Universe. BABAL are making new sweeties......
BABAL reveal a dystopian, sideways view of life; their psych/art-rock approach calling up comparisons with Talking Heads and Patti Smith. The band have gathered great responses around the UK and Europe and have also played live soundtracks for Alternative Cinema presentations.
Karen Langleys' sharp lyrics and powerfully fluid vocals soar over groove-driven soundscapes and songs, meshed with blistering guitars. Alice the Worker, (mime), observes and behaves badly.
Fabulous, charming, sardonic, soulful; and working class. Exceptional.
Charming, alarming and serving up improvisational chunks of beauty between slices of rich vocals, the ever evolving BABAL mix groove-based rock with strange, enigmatic lyrics and blistering rhythms, topped by stunning guitars.
Driven by soaring vocal dynamics, and twisting into vibrant guitar soundscapes, BABAL's music is underpinned by a stronghold of bass and drums. BABAL morph from dark to light, shadow to shiny, leaving a trail of sparkling crescendos, bold rhythms and provoking lyrics. The band move easily between improvised, poetic fusion mixes to theatrical, political, hard-hitting pieces that express the satirical, eccentric core of the BABALONEONS themselves - each one a virtuoso; united they create an intricate web of passionate, vibrant music.