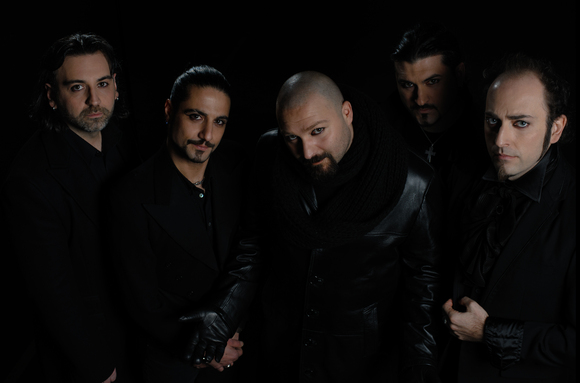 The ARS DIVINA are a lyric - rock band.

Their sound comes from the fusion of two apparently distant worlds : classical music, opera , and rock . A "destiny" announced by the five musicians who attended the Conservatory of Salerno and the locals have decided to try this formula ...
The characteristics of their sound jump from the first listen . The alternation of lyrical singing with the rock or "light" singing, the mixing in the texts, some quotes from the classics of literature, sometimes harsh direct , sometimes poetic and introspective exposition of the themes of the songs , the style of the violin that passes from stringency imposed by the classic with his virtuosity , and the pleasant roughness of Celtic and popular theme. The bass that sews,with a very solid, driven and determined drumming , the groove that jump from the elegance of Bach counterpoint to the more rocky the harmonic riffs , powering to a rhythm section always present. The guitars finally, that amalgamate all with a powerful riffing and impetuous , carving out a space most harmonious than solist , creating an impressive wall of sound .
The musical influences of the ARS DIVINA come from the very essence of classical music, from Bach to Mozart, Pergolesi , Verdi, Puccini, Dvorak, Wagner , and many others, of course, but also from the rock black sabbath , led zeppelin , ac cd , pink floyd , metal , guns'n roses , nirvana , doors , pfm to the nearest system of a down , muse , but the list would be too long and not enough the page ...
The result of all this, it is definitely a kind original which has a base of hard rock , shades of dark , prog and folk.

The " ARS DIVINA " were born in 2003 and its members are: Giacomo ZAR Mercaldo - voice, Roberto Coscia battery , Gianluca Di Marino - guitar, Dario Trieste - down and Pierpaolo Iemmo - violin.
The idea took shape when the five boys, have put together their characteristics , their diversity and their skills , to create a very personal and original musical formula ,
Born by the experience of years of live rock and "classics" studies at the conservatory of their city.
The music of ARS DIVINA is straightforward and pleasantly melodic and joins the rock to classical and opera. The use of a dark and deep voice tones, bass and guitar as main harmonic instruments and the use of the electric violin , gives the group an idea of compactness , body , originality , a short band , which exhibits nuances of classical that evoke the opera and the theater, so delineating ' the fundamental characteristic of their sound .
The group has performed at various events , adding to their live shows and competitions hosted , among which the " Giffoni film festival 2005, 2006 , 2007," " School Expo " " San Remo rock 2005 ' coming as finalists in Ravenna , " San remo Rock 2007," "Festa della pizza 2006, 2007, 2009 " guests every evening live on Telecolore ( local TV) , " Stelle emergenti " Rai Due , the celebration of salernitana’s football team promotion in B (2008 ) held at stadiums " Arechi " and " Vestuti " Salerno "Premio Charlot " international event for cabaret in Paestum, which composed the theme song, "Meeting del mare 2011" in Marina di Camerota, winners of the " why not contest " in Battipaglia and the prize" Demo d’autore” in the thirty-year event “premio Sele d’oro mezzogiorno”. They have assets of a self-produced CD entitled “ATTO PRIMO" .
The extraordinary charge imprinted in the music that the group proposes is exactly like their great desire to play and to do so according to their recipe ... what are the ingredients ?
Well, ATTENDITE ET VIDETE ...