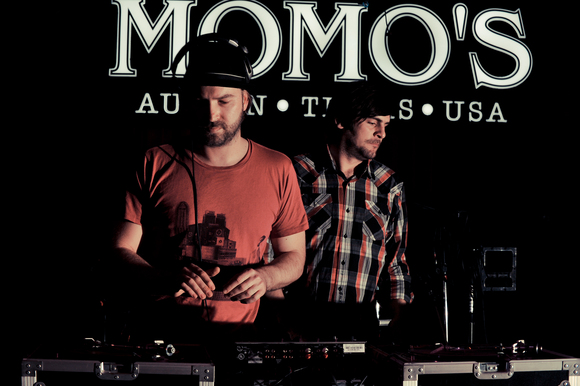 Ancient Astronauts are Kabanjak and Dogu, a production and DJ duo from Germany, who are known for their unique blend of conscious Hip Hop, Reggae & Dub, Funk and Breakbeat.

The Ancient Astronauts are Kabanjak and Dogu, a bulletproof production and DJ duo hailing from Cologne, Germany. The phenomenon of “ancient astronauts, “a belief that extraterrestrial beings visited Earth in ancient times to mingle and trade ideas with early human civilizations”, isn’t an alien concept to these Ancient Astronauts. The cross-pollination and mash-up of ideas, sounds, styles, and a collaborative spirit are their modus operandi.
Although, the long-time friends are quick to admit that they are not followers of the German music scene, Kabanjak notes, “for us music is and will always be an international phenomena”, and Ancient Astronauts are certainly not afraid to draw on influences from international artists and styles.
Self described as a “mash up of the distant past and far future”; these time travelers´ music is a mystic brew born out of an eclectic mix of ideas, sounds and styles.
Already having remixed and collaborated with AM & Shawn Lee, Nickodemus, Fort Knox Five, Ladybug Mecca (Digable Planets), Zion I, The Pharcyde, Azeem, Analogik, Subatomic Sound System & Anthony B, DJ Brace, Bajka, The Pharcyde, Vieux Farka Toure, The Jungle Brothers, Raashan Ahmad, Bajka and Tippa Irie, the Ancient Astronauts always link up with a quality selection of sonic collaborators.
“At an early stage we realized that we are both big music heads so we started running parties in our hometown together”. Those parties became the catalyst for a production team that never forgot its roots. They specialize in diversity loosely glued together by a single thread. Like a good party, you don’t just listen to the music, you experience it.
In 2001 Dogu of Ancient Astronauts started his own label Switchstance Recordings, which was developed as a way of allowing them total musical freedom. The label soon gathered momentum and built up an impressive international fan base. Switchstance Recordings is now famous in international club circles for the integrity of its production and style.