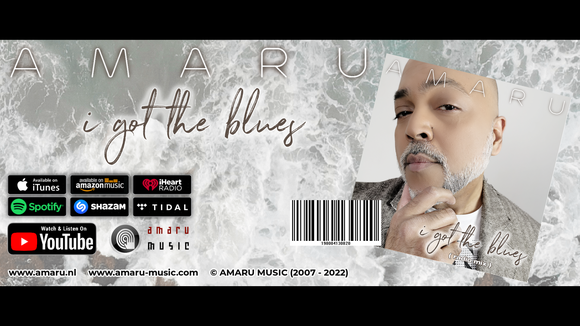 AMARU is an internationally acclaimed independent recording artist, a trained actor, a published author, a filmmaker, a photographer and a model.    He made his TV debut in his native country on a current affairs high school quiz of which he was the captain.

Moving to Europe in the early nineties and inspired by the sight of his favorite actor Denzel Washington on television
inspired AMARU to pursue acting in addition to music! He studied acting in Los Angeles, U.S.A. and in
Amsterdam, The Netherlands for about 8 years and he has amassed numerous acting credits in film,
television, commercials and print.

His big European TV debut came when he was cast to portray the late opera legend Luciano Pavarotti in the intro
of the Dutch game show “Now Or Never”, a show in which people were offered money to do something they were
afraid of in an attempt to overcome their fears.

In the summer of 2007 he headed to Chicago (U.S.A.) to work on his first EP, which generated the reggae infused
(digital) debut single “Put Your Hands Up”. The accompanying video was featured on then music station
TMF – The Music Factory and it was the “Hot or Not” single of the week, closing at 86% "Hot" at the end of its run.

While the acting gigs kept coming, AMARU was eager to return to music and in 2014 he did just that, resulting in the
synth driven Pop/R&B track “I’m The One You Need”, for which he wrote lyrics in English and Spanish,
sang all the vocals and co-produced. He released 3 more singles before starting to work on his biggest musical project yet:
his debut album “Champagne Attitude”. The 20-song set was written and co-produced by AMARU,
for which he also provided both lead as well as backing vocals.

“Champagne Attitude” went on to win two GOLD awards at the Global Music Awards in September 2019 for
“Best Album” and “Emerging Artist”. The album was released on two CD formats: a full color digi-pack CD album
and a special limited edition CD album with linen packaging.

AMARU's “Champagne Attitude” is an eclectic collection of "Adult Contemporary Pop Music With A Dash Of Latin Soul".

In the summer of 2019 AMARU started shooting his first international feature film “Das Dritte Auge” (translated from German “The Third Eye”), in which he plays the part of internationally wanted cyber criminal “John Michaels”. In November 2019 the movie was screened to a sold out crowd in the city of Koblenz, Germany.

August 2020 sees AMARU releasing his 11th. single "Tell Me", a "Pop Meets Politics" kind of a song about
the idiocy that is now planet Earth. The music video for this single has won numerous awards at
film festivals worldwide. In May of 2021 he released the catchy salsa track "Pa Mi Gente" ("For My People"),
which is a tribute to his South American roots and an homage to Latin people and Latin culture.
In February of 2022 he releases his 13th. single "Gentle Giant", his contribution to
the anti-bullying movement worldwide and in August of 2022 the singer releases the final single "I Got The Blues"
off of his internationally acclaimed debut album "Champagne Attitude".

If the pandemic of 2020 has done anything right, it definitely provided AMARU the time to finish working
on the manuscript of his first book! He made his literary debut on 20 December 2020 by releasing his cookbook
"AMARU COOKS - A Touch Of Suriname Through Food & Anecdotes", a project he had been working on in secret since 2015!
So far the book has garnered quite some accolades, mainly in the U.S.A.

November 2021 sees AMARU back in the studio working on his second album with the working title
"The Melanin Project". The genre of the forthcoming concept album will mostly be R&B/Rap/Neo-soul
and Spoken Word. AMARU plans to release his new album in the spring of 2023.