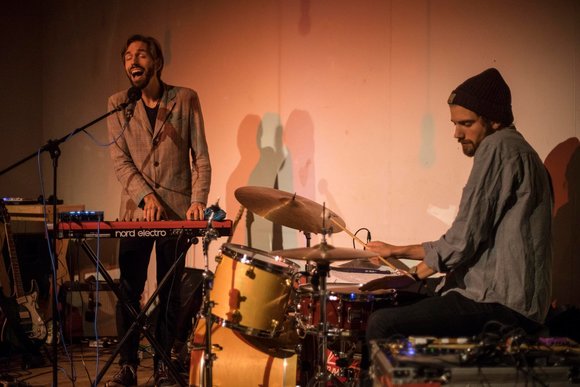 Together they make experimental, compelling, intense and largely improvised music, which sounds like a mcrossing between postrock and (free) jazz, or between Efterklang and Motorpsycho, or between Radiohead and Pink Floyd.

Arthur Adam (Enschede, NL) originally was a singer-songwriter extraordinaire, with a voice of elastic, intense recitation, philosophical texts and a love for experiment, jazz and playing a lot of instruments. He has already scored an album of the week on 3voor12, a single of the week on iTunes, performances at DWDD, the Nederpopshow and almost all national radio stations. His nicknames are "the best kept music secret in the Netherlands" and "the Dutch Jeff Buckley".

Stefan Schneider (Münster, D) is originally a jazz drummer, with a fresh modern sound and a predilection for much more than jazz. He graduated from the conservatory in Enschede, where he met Arthur, and played with many big names in and around the jazz world. He operates with verve sample equipment and synths. His nicknames are"the monster from Münster", but is a master of subtlety.

In 2016, after a handful of performances and rehearsals, AASS decided to record their first EP, in the Big Dog Recordings studio of Tim van Doorn in Antwerp. That worked out a little too well. In one intense weekend more than an hour of useful material was included. Live in, without overdubs .Heavy music, according to the jazz method: 1 or 2 themes, a fixed text, a few cues and further improvisation, trying to capture the moment together. The best tracks are now bundled on the album A Soundtrack for New Memories, which will appear on January 12, 2018 on the DIY label BandBus Records.

"Listening to AASS is like stepping into a wild river. It will submerge you and take you to places you didn’t know existed."